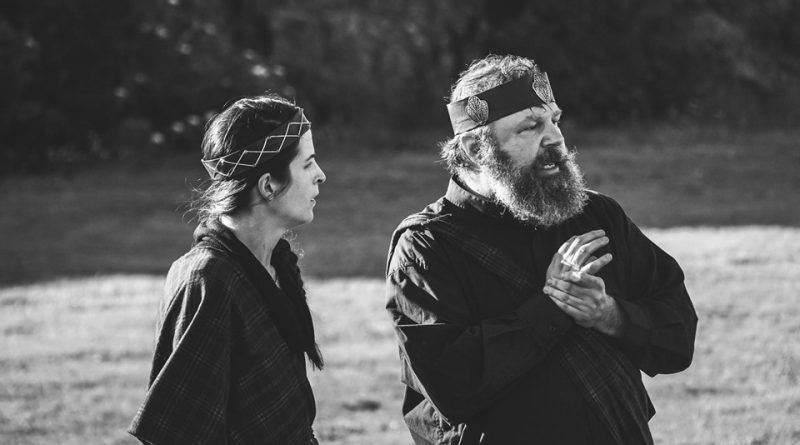 The Shakespeare by the Sea team has been working hard to give Newfoundlanders a taste of Shakespeare.

Visiting Signal Hill this time of year can offer up some breathtaking views and sights. However, visit at just the right time (and with a ticket in hand) and you’ll be treated to something a little out of the ordinary.

Shakespeare by the Sea is an organization with just over 25-years under its belt which aims to bring some of William Shakespeare’s greatest works to Newfoundland. Perhaps one of the biggest differences between this particular production and many of the other groups geared towards Shakespeare fans is that Shakespeare by the Sea incorporates the scenery and atmosphere of the province. The organization does not make use of a traditional indoor theatre, and instead takes advantage of the backdrops provided by mother nature, right here in Newfoundland.

The Shakespeare by the Sea festival dates back to 1993, when a group of Memorial University students were looking to experiment with the idea of an outdoor theatre. Now, some 26-years later, the Shakespeare by the Sea festival has become a perennial draw for lovers of the drama, comedy and farce of the English language’s greatest writer. And that is something Conception Bay South native Bronwyn Keough is proud to be a part of.

Keough works as stage manager for this year’s rendition of Macbeth – a production that many Newfoundlanders may be familiar with thanks to the province’s school system. Because it’s one of Shakespeare’s most notable works, Keough says there are many people who already know the story.

However, Shakespeare by the Sea intends to provide gallery members with an experience they won’t soon forget, despite how well-versed they may be in the play.

“We’re providing parts traditional Newfoundland culture, like with the music and different costume choices, and things like that. We’re really able to use our environment to kind of tell that story in the best way possible,” Keough said.

The company features only volunteer actors in its productions.

As stage manager, Keough is responsible for the logistics of the performance – how many props are needed for particular scenes, the safety of those involved, and many other behind-the-scenes necessities.

She has been involved with Shakespeare by the Sea since its 2017 season.
“I consider myself very lucky … Macbeth is one of my favourite shows that Shakespeare has written, so I feel really fortunate to be able to be a part of this. It’s really like a big family – that’s the feeling I got after coming back from last year,” Keough said. “It’s just really awesome to be able to talk about Shakespeare, and to have these little nerdy moments with people … we become more connected through all of this.”

Keough said this production aims to break the stigma that Shakespeare is not for everybody, and that it can, in fact, be enjoyed by anyone regardless of their previous Shakespeare knowledge, or lack thereof.

“There’s an idea that Shakespeare is, you know, strictly an academic thing and you only enjoy Shakespeare in the seat of a classroom, or you only get to read Shakespeare when you’re doing it for a class project,” Keough said. “There’s this kind of daunting air about it all, and that’s why I feel so fortunate to work with these people. We’re trying to tear down that wall, and make it feel more acceptable to people of all walks of life. It’s a really great way to enjoy the language and the culture of Shakespeare, without feeling like you’re out of place in the area.”

Along with the Scottish play, as MacBeth is called, the company this year is focusing on The Comedy of Errors. The first of the two productions goes ahead every Saturday and Sunday at 2:00 p.m. at the Fortis Courtyard, while the latter runs on Fridays and Saturdays at 6:00 p.m. at Signal Hill.

The company’s production of Macbeth has been running since July 12.

Keough says that the reception thus far has been “phenomenal,” and that it has been a gift to working on such a unique production.

“It’s this integration of different styles and time periods that brings this story of the human relationship with power and authority, and what one will do to try and get ahead and get that power … (and ) is that really worth it in the end?” Keough said, referring to the sometimes dark moral plot in Macbeth.

“It’s a narrative that combines parts of the past, and parts of the present, to try and show the audiences that we’re talking about life itself, and power.

We’re not telling a story about days gone by, we’re talking about right now,” she said.

The location of the production plays a big role in making Shakespeare by the Sea stand out amongst a crowd of Shakespeare-focused productions around the world.

“The field itself brings the production to a whole new level … just hearing the actors go from performing in a school to performing on a hill, it takes the production from being just a story about ‘these people, and their lives,’ to really showing the audience that this is the world we’re talking about,” Keough said. “The sky we talk about, that’s the sky right there above us – we can really talk about the field we’re on, and the audience can see and feel what we mean for themselves. Instead of just using a certain corner of the hill to tell this story, we use the entire Tattoo Field, and I think that really brings this production to life and makes it this epic ordeal.”

Macbeth will play every Friday and Saturday up until August 17, while The Comedy of Errors will see its last production on August 11. Those looking to purchase tickets can do so online at www.shakespearebytheseafestival.com.