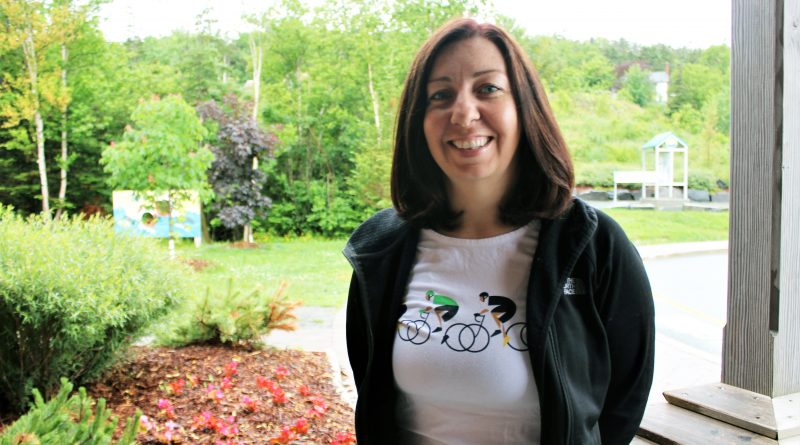 For Jenn Wicks, the grueling task of cycling from one end of the province to the other is one summer holiday she won’t soon forget.

In early July, the Conception Bay South resident set out from St. John’s on the T’railway line to Port aux Basques, logging more than 900 kilometres of sweat, rain, bugs and muscle ache.

Wicks had originally planned on cycling back too, but called that leg off due to the “unforgiving” state of the former railbed in certain long stretches.

Wicks’ travels were part of a fundraising effort, which is still ongoing for Fighting Blindness Canada. Originally, she hoped to raise $2,000, but as of Monday, July 22, she had managed to raise over double that, with some $4,800 pledged. Donations are still being accepted.

The weekend before she set out, Wicks’ husband, John Hancock, took on a similar challenge, travelling from St. John’s to Grand Falls-Windsor in 43 hours along the often, rutted, bumpy, potholed terrain of the Newfoundland T’Railway. She says the two of them were inspired to do these sorts of travel challenges while living in the Middle East, where they came across a cycling blog by a man living in the Goulds, Malcolm Simpson, who had travelled from west to east on a fat bike.

“I met up with him a few weeks ago, and had a chat about what it might be like. I had some curiosity as to how fast I could do it, and whether or not a woman had done it solo before,” Wicks explained. As far as they know, Wicks is the first woman to make the journey alone.

“The trail was really tough,” said Wicks. “The conditions were sometimes unrideable, and my body started to break down a little bit, so I’ve got some injuries and I needed to get back and take care of those,”

Those injuries include saddle sores, and worn out quad muscles, which became a big concern as time went on. This ultimately affected her knees, which was an uncomfortable combination with the sores from the bike’s seat.

“I also think I have tendinitis in my elbows, so I have to get that checked out,” said Wicks. “That’s from the rockiness, the vibrations, and constant motions I had to do.”

Despite all that, Wicks had no regrets about how it all panned out. She ended the trip with a total of 936-kilometres under her wheels.

While she had ridden parts of the T’Railway in preparation for the excursion, and knew that crushed stone would pose a problem, the depth of the stone came as a surprise, and the terrain posed more of a hardship than she had anticipated.

The condition of the T’Railway after constant ATV usage also posed a problem.

“In one way it’s great that the ATVs are using it. They pack (the crushed stone) down, and make those ruts,” she said. “On the other hand, an ATV is basically shaped like a triangle, with the person on top. A bicycle is the opposite, so when I’m in the bush – when it’s really underused and not maintained, I’m getting cut up by all the trees … I can’t ride in the middle, so I’m right over in the trees. It gets pretty sketchy sometimes, and a lot slower.”

The crown of stone that builds up between the ruts created by ATVs is often too much for a bicyclist to cope with.

While the T’Railway is specifically created in some places for ATVs, it can be problematic at times, she admitted. Wicks noted that on the east coast of the trip, specifically around the Clarenville region, she encountered a number of ATV riders who seemed to have little regard that a cyclist was ahead or behind them. However, that mentality seemed to change, she added, once she reached Deer Lake and beyond, where ATV riders were much more courteous, and used the T’Railway the way it was meant to be used.

Nutrition, and staying hydrated and energized, also became more of a challenge than she was expecting. Wicks said the lack of services along the T’Railway is a big problem, and something that could be improved upon.

“If we’re going to develop the infrastructure, I think services are essential,” Wicks allowed. “The nutrition aspect is hard when you’re out there for a long time on your own. I know that I was dehydrated, I wasn’t getting enough food, and that affects your mental state, as well as your physical abilities.”

One setback for Wicks came relatively early in the journey, when she was passing through Seal Cove and heading into Holyrood.

Wicks decided to carry with her a small stuffed companion – a sloth doll that was seated at the front of her bike. Although the sloth was there when she stopped in Seal Cove to grab a photo of her ride, when she arrived in Holyrood she noticed that her stuffed riding partner was missing.

The sloth was gifted to Wicks by her husband as a surprise, and although it’s been some time since she last laid eyes on the doll, she stills hopes someone may come across it on their own travels.

“I’m not the fastest rider, so I always kind of joke that I’m a bit of a sloth … I still get there, but not always the fastest,” she explained. “It was just kind of comforting, and served to kind of remind me that it’s okay that I’m not hitting the speeds I wanted to hit – I knew I would be suffering from that. It’s this expectation versus reality thing that puts so much pressure on you when you’re not at your best. So, I wanted to keep that to remind myself of that.”

Despite, the pain, hardship and loneliness of the trail, Wicks isn’t ruling out tackling it again some day.

“I wasn’t afraid of being alone,” she said. “I wasn’t afraid of bears or other animals. I was mostly afraid of people riding at high speeds on ATVs and dirt bikes. I think, that’s something we can improve on very easily. It’s just a matter of enforcement, and a change of culture. I’d personally like to see that change.”