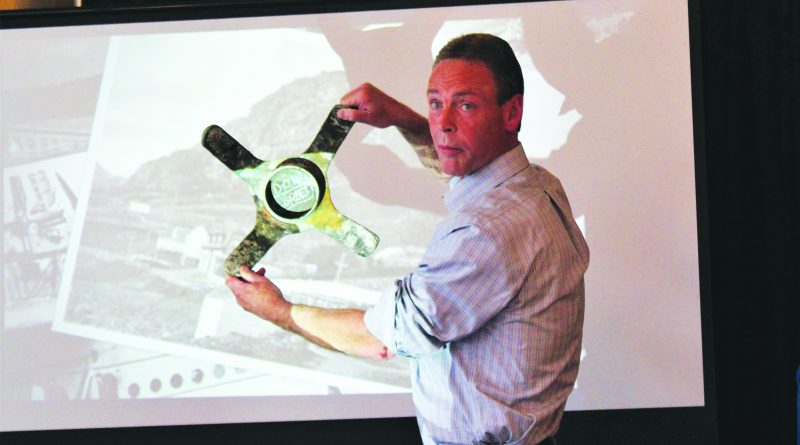 To kick off Holyrood’s Come Home Year celebrations, members of the community got together last week to relive some of their history firsthand.

The first of nearly 50 events taking place throughout July in Holyrood was the opening of a time capsule, which was buried in the community some 30 years ago.

The capsule was dug up from its home outside the Holyrood Library and transported with a police escort to the Star of the Sea Hall for the unveiling. Constructed of metal, the capsule proved to be quite tough to open at first. However, when the seal was cracked, the memories began to flood through the building.

Dan Hunt, who was a part of the festival committee 30 years ago when the capsule was buried, said it was all part of the Squidfest summer celebration at the time.

“One of the final items of that festival 30 years ago was the filling of the time capsule, which took place at Holy Cross school,” he recalled. “So, it’s very fitting today, 30 years later, that the first thing we do in the official opening of our festival this year, is the opening of that same time capsule.”

Mayor Gary Goobie and councillor Kim Ghaney helped unveil the items one by one as they were extracted from the capsule.

“You could consider this a soft launch of Come Home Year and our 50th anniversary celebrations,” Goobie said. “There has been a lot of time and effort gone into the preparations in this historic event in our town’s history. A lot of planning went on behind the scenes over the past year.”

The first item taken from the capsule, preceded by a spur of the moment drumroll from some of the crowd, was the town’s first council minutes, dated June 19, 1969 – the year of incorporation. Included with it was a lengthy agenda for the first official council meeting.

Holyrood’s first Town Clerk, Evelyn Deveraux acknowledged the items brought back memories. “Every day I wake up, I thank God. And to be here today … Well, I didn’t expect to be doing any of this,” she admitted. “But, how could I not? It was a wonderful thing for me to get the job as town clerk at the time … It’s just wonderful to be here. When you had five children and a sick husband, you needed work, and you needed to not be away from the community, so I was very grateful for the job.”

Other items in the time capsule included a list of staff at Holy Cross Elementary, a Canadian one-dollar bill, a poster for the first Holyrood squid-jigging folk festival on August 5, 1989, and even a copy of the first edition of The Shoreline, dated May 9, 1989.

Also among the objects was a VHS tape which, assuming council is able to track down a working VHS player, will be viewed at a later date.

“This is the first time I’ve experienced something like this, and it’s a treat, let me tell you that,” Hunt said.

The items will be available for viewing at the museum set up for the season at the Port O’Call building.

As part of the 50th anniversary closing ceremonies on Sunday, the Town will fill another time capsule with items from this era and generation.
That capsule is set to be opened 25 years from now.