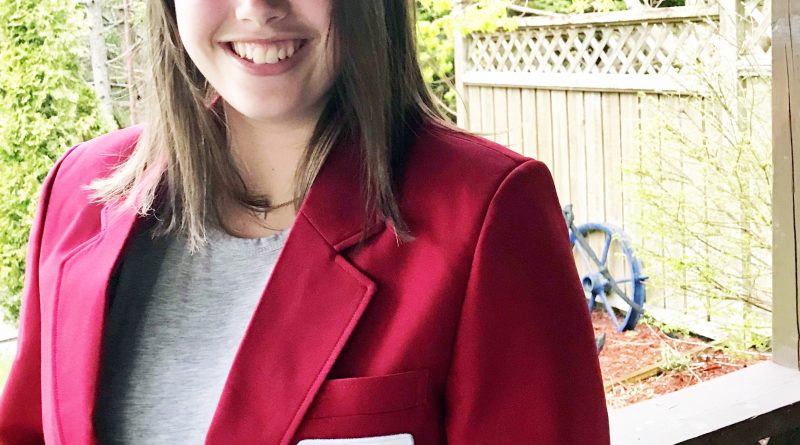 Erica Bennett, 17, will be spending the next year in Switzerland as part of the Rotary Club’s Youth Exchange Program.

“Travelling, and exploring other cultures, and meeting new people, is just something I have a passion for. The opportunity was there, so why not? I can always come back and finish my education afterwards,” said the CBS teen, who graduated from Holy Spirt High this year.

Bennett heard about the Youth Exchange Program last May at the 2018 District 7820 Conference in St. John’s, where she met other students who had taken part in the program. She attended a follow up information session in November for parents and potential students.

The process begins with that information session.

Students who choose to apply have about two weeks to polish an application, followed by an interview process, with the final selection being made in December.

Once the student is chosen, she gets to make their top three choices as to where to travel, with the final decision made by a district chair in Halifax.
Kathleen Ellwood is the chair of the Youth Exchange program.

“Students who get chosen are very well-rounded students. They’re capable of anything. Every student that we send over are fabulous students, fabulous people. And when they live abroad, they become more well rounded,” she explained. “Erica is involved in lots of things already, she’s a go-getter, she has a very cheerful, do-it-no-matter what attitude. You can tell by talking to her, that any kind of issues that may arise, that she’s going to face them head first. When we read her application, and her letter telling why she wanted to go on exchange, she was just such a strong candidate.”

While away, Bennett will live with up to three host families, attending the equivalent of grade 12, and learning German, French, and Italian and studying the culture.

Ellwood noted that Rotary requires the students to live with up to three host families for a fuller experience.

“It’s adding onto that well-roundness of the student,” she noted.
About 8,000 students participate worldwide each year, according to Ellwood, who said that the St. John’s Northwest Rotary Club has been involved with the program since about 1982.

Bennett, who is already well travelled, having visiting Australia and Ireland, told The Shoreline that Belgium was her first choice, followed closely by Switzerland.

“Both of them, the main reason was because of the French language,” she explained, adding that she hopes to become fluent.

She’s also excited about the ability to visit other European countries.
“It only takes three hours to cross Switzerland- that’s like, not even to Gander from here,” she joked.

Switzerland is bounded by France, Germany, Italy, and Austria.

“As well, both countries are heavily involved in Girl Guides,” she noted.

In fact, one of the five Girl Guides World Centres is located in Switzerland, with others being found in Mexico, the UK, Africa, and India.

This is a big draw, seeing as Bennett has been involved in that organization for 13 years, all the way from Sparkes to Rangers. She has sat on the Provincial Youth Council for two years, and recently finished up a term on the National Youth Council for Girl Guides Canada.

“And I’m also a Brownie Leader. It’s kind of my life,” she laughed.
Bennett, amongst other things, also plays rugby and ultimate frisbee.

She leaves this July, and expects to return to Newfoundland in July of 2020, beginning the first part of her journey in the city of La Chaux-de-Fonds.

She encouraged anybody to step outside the box and consider applying.
“If the opportunity is there, go for it,” she advised.

“We’re so connected as a world now,” she added, noting that she’ll be able to keep in touch with friends and family via video calling and instant messaging.