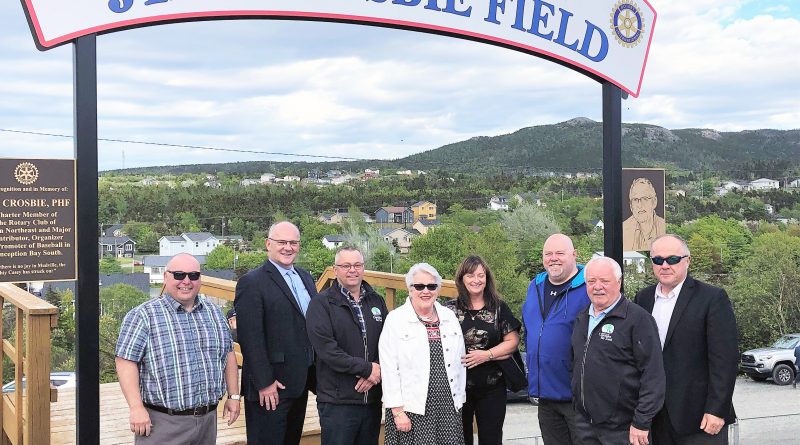 What was once the Stoney Hill Baseball Field is now the Jim Crosbie Field.
The sun shone brightly on Wednesday evening, June 19th, making for a

great view of the unveiling of the new name for the baseball field at the top of Stoney Hill, just next-door to the CBS Town Hall. There were dozens of people at the entrance to the Hill that evening for one specific reason – the baseball field was set to be renamed after a prolific member of Conception Bay South’s baseball community, Jim Crosbie.

The late Jim Crosbie, known to some in the community as ‘Mr. Baseball,’ was a prominent member of the sporting community in Conception Bay South. He helped spearhead the construction of the field, which is located behind the town swimming pool, and helped make baseball become a part of the Newfoundland and Labrador Games back in 1996.

The idea to rename the field came from the Rotary Club of Avalon Northeast. Its recommendation was brought to the town council in February. The motion to follow through on the idea was carried unanimously, and now with baseball season again underway, the name change finally became a reality.

Rotarian Bill Alcock attended the unveiling of the new field sign and spoke to the legacy Crosbie left for baseball enthusiasts in CBS.

“Without Jim Crosbie, and a few others, this facility probably would not be here,” said Alcock. “In 1996, the Summer Games were awarded to Conception Bay South for the first time. Baseball was a part of it, but they had to play down on the old Lion’s field, which is an old softball field. Whenever a kid got older than 12 or 13-years-old, balls start flying over the fence, and they never saw them again. Jim said, ‘No, we want, and we need, a regulation field.’ His vision, his dedication, his perseverance, as well as with the able assistance of (then MHAs) Ralph Wiseman and Bob French, they managed to find the funding, and the effort, to build this field.”

When the field first came to be, Alcock noted, there were no lights and no scoreboard – both of which can be seen on the field today. Crosbie was so determined to get a scoreboard, Alcock recalled, he even installed the wiring himself to make the job easier when the time came for the clock to arrive.

“He didn’t tell anybody about that wiring – in fact, he paid for it himself,” said Alcock. “That’s one of the many things that Jim Crosbie donated himself, and said nothing about, looked for no fanfare, looked for no thanks.”

Many people joined Alcock in sharing their favourite memories of Crosbie, some taking time to remember one of his most iconic looks on the field – with a Diet Pepsi in one hand, and a hot dog in the other as he surveyed the action.

“The Crosbies were always the first to offer up their house for team get togethers, and swims, and food, and fun times. Jim Crosbie was in the middle of all that long before (organized) baseball (came to CBS),” said Conception Bay South Mayor Terry French. “Imagine, only 23-years-ago there was no baseball in our provincial summer games. It’s people like Mr. Crosbie who lobbied to have that sport added. Today, it’s probably one of the fastest growing sports in our province.”

Jim widow Tessa and other family members were also on hand for the renaming ceremony. After pulling the cover to unveil the new signage, she spoke with The Shoreline about what the renaming means to her family, and what it would have meant to her late husband.

Tessa said while she is accustomed to seeing her husband’s name associated with baseball related things, given that he is in the Baseball Hall of Fame, it was humbling to see his name and face displayed so prominently at the entrance of something he worked so hard for.

“This is a recognition of everything that he loved so much,” she said. “He’ll never be forgotten – his name will go down in the annals of Conception Bay South history. So I think that’s why it means so much to our family. We’ll never forget him, of course, but now the town won’t either. Kids will see this and wonder who he was, and somebody else might be able to tell them how this field came about – because of him, there’s baseball.

“He would have loved this, but he would never have let anybody know that he loved it,” Tessa added, laughing. “He was a very humble man, and never wanted any recognition for anything he did. But, this is the real deal – it’s really like the entrance to a ball field. It’s wonderful, it really really is.”