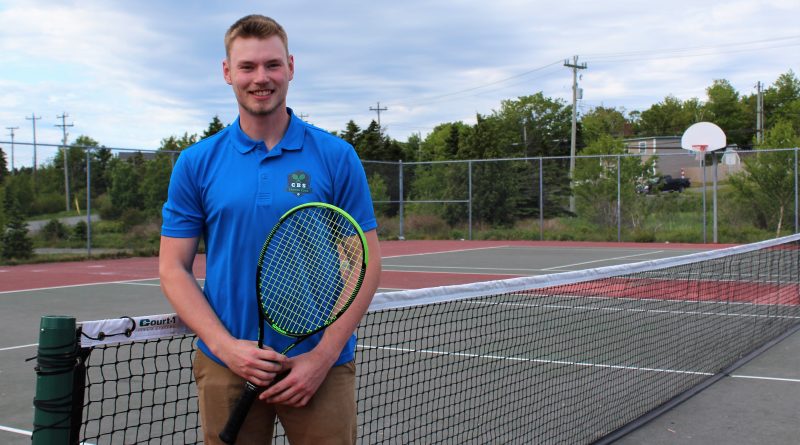 Tennis has seen a boost in popularity in Conception Bay South over the last few years, thanks in large part to the efforts of a young local sports enthusiast, a businessman who was keen to help out and the town’s recreation director, who put the resources of his department at their disposal.

At 16, Steven Rideout was accepted into the Canadian Youth Ambassadors program, in which participants are tasked to consider an issue in their community and how they can tackle it through a community service project. At the time, Rideout was the only Newfoundlander in the group.

With some helpful advice from his father, Rideout ultimately decided to focus on the benefits of leading a healthy lifestyle through sports. Rideout had been involved in a myriad of sports over the years, including hockey and baseball, even badminton. Tennis, however, was something new to him.

After returning from his Youth Ambassador trip, Rideout met with the Town’s Director of Recreation and Leisure Services, Dave Tibbo, to see about setting up a tennis tournament for the community that summer.
Rideout’s tournament ultimately saw 26 participants. Over the following years, the tournament continued to grow in popularity, even mustering enough talent to form a team for the Newfoundland Summer Games in 2016. It placed third in that competition.

“Honestly? It’s been a super rewarding program, I’ve been able to meet lots of people,” Rideout said. “We use these two courts at Villanova Junior High, and the Town even gave us a baby barn to use for equipment storage. That’s been a big help.”

It’s a big commitment for parents, he allowed, with play on the go three times a week.

“Everyone has loved it so far,” said Rideout. “We haven’t had anyone quit, at all, and people are always coming back for more private lessons – if they book three private lessons, they end up wanting six. It’s crazy to see how many people actually want to play here in CBS.”

Since taking on the sport, Rideout has been nominated for coach of the year.

“When I was growing up in CBS, there was never anything like tennis around. There wasn’t even a youth badminton club or anything like that. So, for me to take the step to starting a club myself, I knew it was going to be challenging,” he admitted. “I also knew that it would take a long time to process and for things to play out. Between 2015 and now, the interest has been skyrocketing – it’s really exciting to see.”

Rideout said it goes to show what kind of opportunities can be made available in CBS. He highlighted the new beach volleyball courts, which sit right next to the tennis courts used by the club. He said that by introducing new sports and athletic opportunities for youth, the Town is doing itself, and its residents, a huge favour.

Rideout credited local businessman Eric Schibler for being a key partner in reaching this latest milestone, the formation of the tennis club. Schibler was chairman of the Summer Games when they came to CBS in 2016.

Last year, Schibler, who owns a number of Tim Horton’s restaurants in the region, got together with Rideout to help him get the club off the ground. Rideout said Schibler donated funds to get the club on board with Tennis Newfoundland and Labrador, and that he has been playing an active role in making sure things run smoothly with the club.

“By and by, me and Eric sat down with Dave Tibbo to try and figure out the best way to go about this program. There were some lessons where we had 13 kids in one lesson, with only two courts – I couldn’t do it myself,” said Rideout. “So, Eric pushed really hard so that we could get a grant.”

It turned it was too late in the year to apply for grant money, Rideout said, making it a learning experience for use next year. But the duo were not dissuaded. Schibler, through Tim Horton’s, struck a partnership with the Town of CBS wherein the restaurants would donate $3,000 to the program, and the Town would match it, resulting in a total of $6,000 in funding for the CBS Tennis Club’s program.

The money was approved at the most recent council meeting in CBS. Rideout said the funds will be used to hire another coach to help with the program, as well as cover summer salaries. It will also allow the club to purchase equipment, such as different size tennis balls to accommodate the various age groups and their needs.

“Clearly, tennis is on the rise. To have that extra bit of help this summer will be a huge support for us. There’s no words to really describe what it means,” Rideout said. “I started this at 16, so to have someone like Eric, who is so experienced on the business side of things, and who knows so much about it all, it helps so much. It’s great to have that kind of support.”