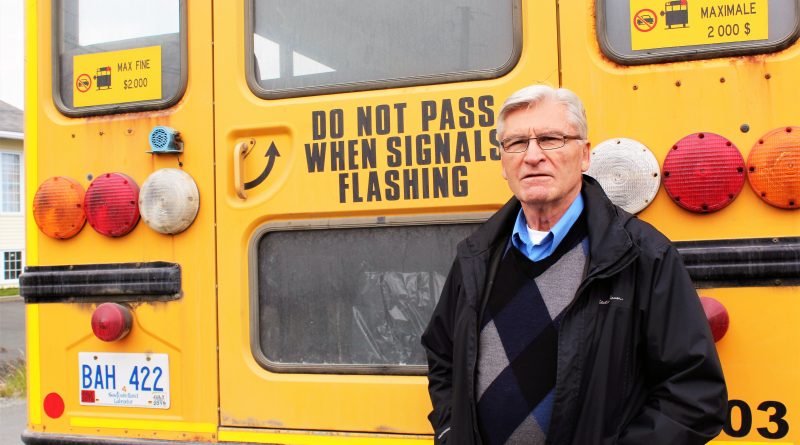 After seeing it happen one too many times, a Conception Bay South bus driver says he has had enough of negligent drivers.

Joe Pilgrim retired from nursing a number of years ago. Finding himself in need of something to fill up his new found spare time, he took on the role of a bus driver. He takes this job very seriously, as he transports the young generation of Conception Bay South.

In his first year of driving, he did it full time. His route had him covering two different schools in the region – Queen Elizabeth Regional High, and St. Edward’s. That took him through Route 60 in Long Pond, a busy four-lane highway.

Being a new driver, he says he was determined to stick it out at the time despite being a bit uneasy on such a busy section of road where drivers were not always prepared to stop, or take note of, vehicles that are some three lanes away from them. In fact, it almost became commonplace for Pilgrim to see drivers blow by the bus when it was stopped.

He says that during a drive that would take approximately seven-minutes, he’d see an average of three or four cars drive through the stop sign that protrudes from the bus when it stops to let students off.

He said after one winter of driving, he had had enough.

The first course of action Pilgrim took was to take license plate numbers. Since he could not drive and take notes at the same time, Pilgrim said he enlisted the help of a student or two, who would sit at the front seat and take a list of the license plate numbers that Pilgrim would read out, as well as the makes of the vehicles.

He says that on at least a weekly basis, he would compile an exercise book page full of numbers.

After bringing the lists to the Royal Newfoundland Constabulary, Pilgrim was told he would also need to be able to identify the driver if appropriate measures were to be taken.

“I couldn’t do that, that’s impossible,” he said. “How can I identify them when all I see is the back of their head driving away? But, they said, that’s the way it is. If they couldn’t be identified, the judge would throw it out.”

That particular regulation has since changed. Now, providing the license plate number and vehicle make will result in a ticket being issued to the registered owner of the vehicle. The cost of such a ticket can reach into the thousands of dollars, as well as six points being detracted from the driver’s license.

Pilgrim said this change, and his efforts in speaking out against inattentive drivers, did have a positive effect for a short time. However, the issue seemed to be around to stay, as it took only one short week for Pilgrim to see people blowing through the stop sign and lights all over again.

“The difference at first was amazing. No one passed through my lights, and it was so good. But, after a week or so, they started building up again, and next thing you know, everyone was back to their normal old habits,” he said. “But, it did work for a while, and that was my intention – not to stick it to people and make them pay a big fine, but to try to educate the public, make them aware that it’s not okay, it’s dangerous, and it’s ridiculous, to pass a school bus when the lights are flashing.”

Pilgrim urges the public to simply think of the kids, noting that there have been more than enough circumstances where he feared a child’s life could have been lost, were he not around to step in.

“When I’m driving, the safety of those children is the utmost thing in my mind. I take it very seriously. I think about it often – what if, what if someone hit a child while I’m driving this bus? It’d ruin me, I’d never live it down. I honestly don’t know how I’d deal with it – I think about that a lot,” he said.

One incident in particular stands out in his mind.

“I was coming up from St. Edwards’ – the year I was driving full time – and I was stopped at Tilley’s Road, where there’s a turn. Not a good place for a bus stop, but that’s beyond my control. I was watching everyone driving in front and behind me, and they were all stopped, so I opened the door to let two little girls out,” Pilgrim said. “Out of the corner of my eye, all of a sudden, there was a big red truck coming, and she was coming fast. I said to myself, he’s not going to stop. One girl was out by the front bumper, and thankfully I knew her name. I yelled out as loud as I could, and she stopped. I managed to get a hold of the other girl just as she was going down over the steps and stopped her.

“If I hadn’t been watching so intently, that truck would have blown right through. It was about the right timing, and I know that that little girl would have been right out in the road when they did. It made my heart stop, and it took me a few seconds to regain my composure to get back on the road again. She was on my mind that whole day – all I could visualize was that little girl going across the road and getting hit by that truck.”

Pilgrim noted that he realizes it would be impossible to stop every single driver from running through these stops. In fact, he noted that some drivers may simply be unaware that a stop is required when the bus is not in the next lane over, but hopes that his efforts will raise awareness.