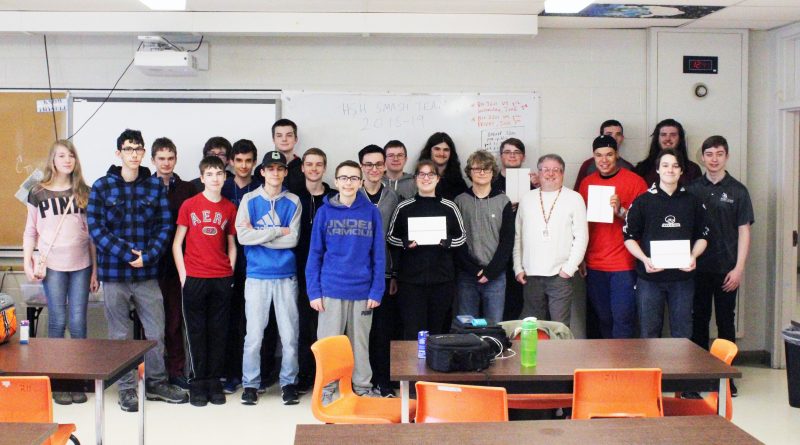 Fighting is usually not permitted on school grounds, but a Conception Bay South school makes an exception to that rule.

At Holy Spirit High, Smash Club is the name, and Smash Bros. is the game.
A group of about 30 students (down, members say from numbers that have been as high as 60 in years past) meet afterschool on Thursday evenings for an hour and a half of competitive gaming.

The Super Smash Brothers game series, a family-friendly fighting affair which pits iconic characters from the Nintendo universe, including Mario, Luigi, Yoshi, Kirby, and Donkey Kong against one another in real-time cartoonish combat, is the group’s mainstay, and namesake.

“We’re all a bunch of people who very much love to game,” summarised club member Samantha Harbin.

This year, students raised about $1,700, enough to purchase four iPads for the Autism Society.

And although the group meets weekly for gaming competition, there’s one yearly event that stands out as clear winner.

“I think the highlight of every year has definitely got to be the Smash game-a-thon, when we stay up for 12 hours and just game on,” said member Tyson Ledgister.

“That’s super fun, a whole bunch of thrills, candy, sleep deprivation, and all that,” joked Harbin.

Teacher Jeffery Locke, who created the club six years ago at the request of a student, said students gain valuable skills from the club.

“We socialise, we theory fight – ‘how did you win, how did I lose’ – we laugh,” he said. “We talk theory about why we lost, and that’s the fun piece because we help each other get good, we elevate each other’s game play, and it’s done in a social way. And in that they learn how to negotiate arguments, conflicts, victories, loss, and they realize, ‘I can’t win all the time,’ and it becomes more of a medium for growth as opposed to just playing video games.”

The club attracts students of all kinds.

The students shared a similar sentiment.

“It’s a place I can go and hang out with people, and be social,” said Xander Burt, who said that he moved to CBS this year, and that Smash Club has been a great place to meet people.

“It’s always interesting to see the many different types of people who are here. There’s bonds you would form here that you would hang onto for a long time,” said Ledgister.

Gaming is also a way to alleviate some of the pressures of life, say the students.

“School’s pretty stressful. You’ve got a lot of work to do a lot of the time. Some people get kind or overwhelmed with all that. But gaming is something that if you’re stressed out about things that are kind of out of your control, gaming is something that’s familiar, and it’s something that you have a lot of control and influence over,” said member Jeffery Caines.
“You can leave the stresses of the real word and enter this virtual world of whatever you want, and just be absorbed by the story, or the action, and leave behind whatever stress you have at the moment,” added Burt, who noted that studies have gone into the positive effects video games have on cognitive skills and mental health.

Harbin, Caines, Burt, and Ledgister are all in their final year at Holy Spirit High, and all agree that memories made competing in Locke’s gaming club have been some of their best.

“I’ve been to many, many schools because of the amount of times I’ve moved and he’s one of the best teachers that I’ve ever had,” said Burt.