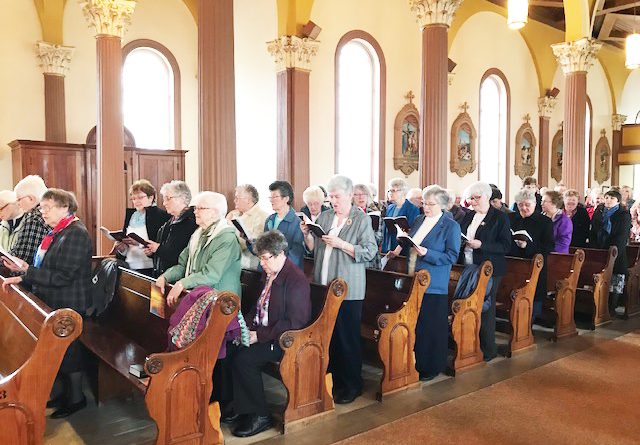 They may not be quite as prominent in the community as they once were, but Conception Harbour’s Sisters of Mercy are still well appreciated, as was evident at a celebration last week marking the 150th anniversary of the order’s arrival there.

The Sisters of Mercy is a congregation of religious women who follow in the teachings of their foundress, Catherine McAuley. Born in Dublin, Ireland in 1778, McAuley went on to build the first House of Mercy in Ireland in the early 1800s which sheltered homeless women, tended to the sick, and educated young girls. It was these practices that eventually became the Sisters of Mercy – an organization that has spread internationally since its inception. McAuley died in 1841, but her legacy lives on through those who follow in her footsteps as Sisters of Mercy.

The sisters’ presence in Newfoundland can be dated back to 1842, when three sisters arrived in Newfoundland from Ireland. Conception Harbour was introduced to the Sisters of Mercy in 1869, when a group arrived by boat to set up a convent.

On May 21, the Sisters celebrated their 150th year being in the community.
Helen Keating, though not a nun herself, has been heavily involved in the workings of the convent for as long as she can remember. She told The Shoreline the celebration was a great success, a fitting tribute to the significant role the women played in small-town Newfoundland.

“They teach, they visit the sick, they visit homes, and they’re just very generous when it comes to helping those in need,” said Keating. “(The celebration) was very well attended. We had as many people at the dinner as we could. You know, the church is only so big, but we fit in as many as we could. Many of the residents of Conception Harbour, and neighbouring communities, were there. Years ago, (the Sisters) used to teach young girls, so some of the people there grew up being taught by them.”

It’s harder these days to find a Sister who still teaches in Newfoundland, due to a dwindling number in the order and the change from denominational schools in the late 1990s to publicly-run ones.

“Now, being out of schools, they do a lot of visiting,” said Keating. “They visit the sick, senior citizens, everyone. And, it’s not just here in Conception Harbour. Sometimes they’ll go down as far as Bay Roberts, and Holyrood, and such places too, so even nowadays, they’ve got a strong presence.”

The May 21 celebrations included a Mass, held at St. Anne’s Church in Conception Harbour. Bishop Anthony Daniels, alongside seven priests diocese were present at the event. As well, some 30 Sisters of Mercy from across the province made the effort to be present at the celebrations.

Keating presented a brass plaque to Sister Geraldine Mason – one of three Sisters currently living in Conception Harbour – on behalf of the parishioners in the community. This plaque will be placed in the church to commemorate the 150-year milestone.

Following Mass, the party of about 200 gathered at the Marion Hall for a meal, as well as a presentation by Robert Keating, who also served as master of celebrations for the Sisters’ 100th anniversary in 1969.

Agnes Richard served as a guest speaker at the event, recounting some of her fond memories of growing up being taught by the Sisters of Mercy.
Despite the strong influence of the Sisters of Mercy in Conception Harbour’s history, their numbers have seen a drop in recent years. Currently, there are three Sisters living there – Geraldine Mason, Ellen Marie Sullivan, and Ruth Beresford.

“It’s all over the world, I suppose, in all denominations. It’s not just the Sisters of Mercy that are seeing this, but I think a lot of religious groups,” Keating said of the decline in numbers. “Unfortunately, the interest just doesn’t seem to be there as much as it was years ago. I’m not sure what’s taking its place, though. People are just more independent now, I suppose.”

However, Keating is confident the order will not disappear. Not any time soon, at least. “The Sisters were very generous when times were poor,” she said. “They helped a lot of people in a lot of ways, and that hasn’t changed. They’re still doing it. We have people here in our community, and neighbouring communities, who are finding it hard to make ends meet, and the Sisters are very generous in helping those people, for example. That’s why their work is so important here in Newfoundland.”