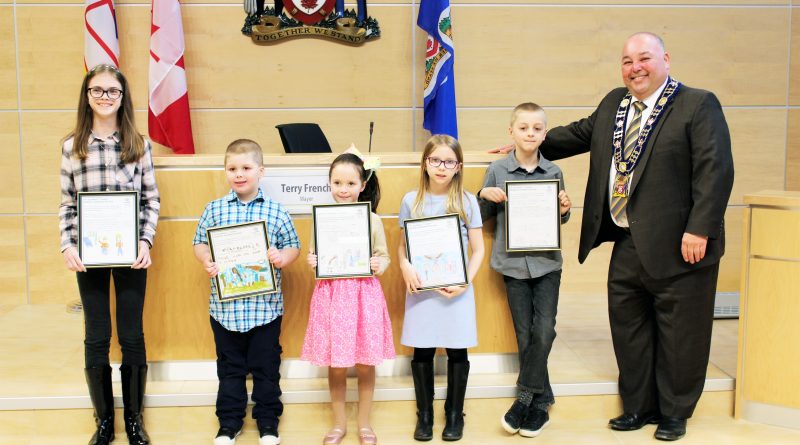 The next municipal election is two years away, but that didn’t stop a handful of possible future contenders from trading ideas with current CBS Mayor Terry French last week.

As part of a light competition held at local schools, including St. Edward’s Elementary and Topsail Elementary, students were tasked with explaining what they would do if given a chance to act as mayor for a day.

Winners were chosen at each grade level ranging from kindergarten to grade four, and those winners were given the chance to attend last week’s public council meeting to meet the mayor and have their ideas read aloud to council, all while receiving a certificate to commemorate the moment.

Although the winners all got their chance to have their ideas showcased, there were still a few honourable mentions that Mayor Terry French wanted to read. He said there were some other submissions that either got a good laugh from him, or that he simply thought were significantly forward-thinking.

Unsurprisingly, there were plenty of fun submissions, such as one student who said they would make Fridays a day off, simply because they like having four-day weeks at school. Another student suggested building a wall around Conception Bay South so that the wind could not get in.

“I’m going to have some competition next time, clearly,” French said.

Outside of the five winners present last Tuesday, some of French’s honourable mentions struck on some more serious topics, akin to the ones suggested by the winners.

“I would lower tax rates by 25 per cent, mainly because there are so many families that are struggling with financial problems,” wrote one of the ideas French read that night. “You’re probably wondering why I didn’t say 100 per cent. That’s because this town still needs money for clean water and sewers, and that is what I would do if I was mayor for a day.”

William Penney of St. Edward’s Elementary was the winner from the kindergarten level. He said that, as mayor, he would ensure that the town was nice and clean.

The next level up from that was Zoe Adams, a grade one student from Admirals Academy.

“I’d help people, like holding the door for people or picking up people’s garbage. I would also help out old people – even strangers,” Adams said.
Hayden Yetman, a second grader from St. George’s Elementary, wrote that if he were mayor for a day, he would “choose taste, not waste.” Yetman said he would make restaurants responsible for their food waste by composting, or donating to food banks.

At the third grade level, Anna Richards of Topsail Elementary was named winner. Her idea was to lower taxes, add more garbage cans, and focus on fixing the potholes throughout the community. She also hoped to see more sidewalks, stop lights, and security cameras to increase safety for pedestrians and drivers alike.

Lastly, Brooke White was chosen from the fourth grade entries. She attends St. Edward’s Elementary, and said in her submission that if she were mayor for a day, she would upgrade all the playgrounds at each elementary school in the area.

“The reason why I would upgrade the playgrounds, is because I want to make every playground accessible to every handicapped child. I just don’t find it fair to see handicapped kids not have fun at recess,” White said.