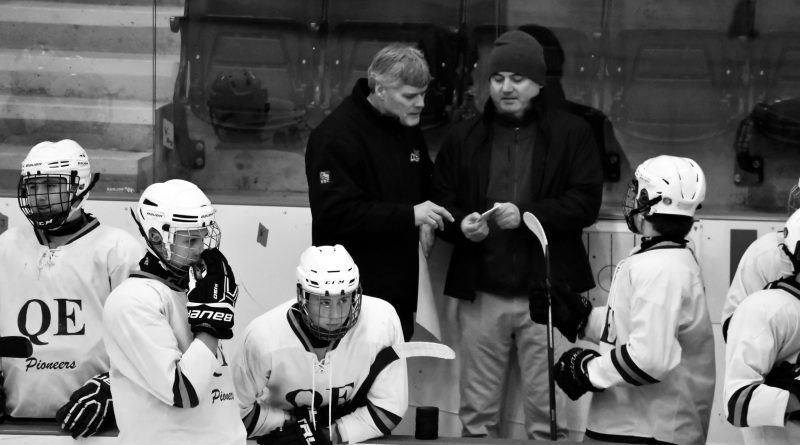 For the last game of the year, students and staff at Queen Elizabeth Regional High wanted to do something special.

There has always been a strong hockey community at Queen Elizabeth Regional High School in Conception Bay South. Now, with the school year coming to a close, for some grade 12 students, it also means an end to their high school hockey careers as they move on to the next chapters in their lives.

Because of this, the last game of the year, held on Tuesday evening, May 14, was bound to be a big one.

The idea was to host a student vs alumni game, where current students on the school’s hockey team would share the rink with people who have long since graduated from Queen Elizabeth. Often, this meant that students would be facing off against members of their family, whether that be siblings, aunts and uncles, or even their parents.

Doug Crews is one of the members of the school’s coaching team. He, alongside Jeff Fagan and Kirk Youden, sat at the forefront of Tuesday’s event.

“What we did, was we went to the current team and asked if there were any alumni that they’d like to play against. We got them to pick a few players, and we filled in the spaces here and there with other alumni. So, we’ve got a couple players on the team now playing against their fathers and uncles. When it started to fill out, we got some cousins and even some brothers and sisters in the mix, too,” Crews said.

One of the alumni players, Crews added, was the all-time top goal scorer at Queen Elizabeth. Crews said the idea is to attract different generations of fans as well. The idea drummed up so much interest they actually had to turn down some possible alumni players to keep the numbers at a manageable level.

“We’re hoping, in the future, we can have another whole group of people who can represent the alumni team, and over the years give people the chance to come back and play,” Crews said. “I’m sure it will make for a good game of hockey. Most of the people that you’ve got there, no doubt some still have a level of competitiveness in them – we’ve got guys who are skating every day, and we’ve got guys who haven’t skated in five years, but we want to involve everyone. It’s bound to be a good game.”

And the game’s reach does not end there.

In the past, hockey players from Queen Elizabeth have done plenty to give back to the community, including a recent game featuring a toy drive that ended with nearly two full vans’ worth of toys to donate to the Janeway.

This time around, after hearing news that the Autism Society of Newfoundland and Labrador had been running dangerously low on funds, Crews said the school’s hockey team wanted to do something to help out.
In late April, the Autism Society put out a call, stating that without the help it usually receives, it will need to start cutting some of its many services. In the past three years, the amount of annual fundraising monies decreased from $600,000 to $300,000 – a 50 per cent decrease.

“Before we even had it organized, or had ice time booked and whatnot, we just happened to notice in the news that the Autism Society was down $300,000, and they were looking for donations and fundraising,” said Crews. “The timing of it worked out, so I reached back out to (Fagan) and (Youden), and they were totally on board. It was just a couple weeks back, starting with simply having an end-of-year game for the boys, and it became what it is now. Why not have it so that there’s a bit of meaning behind it, and do some good?”

Crews said that while it is often the students who look to involve charities and other such organizations in their various games, he still sees it as a good way to get a message across to students about the benefits of giving back to their communities.

“With the toy drive, I mean, that was the kids’ idea. If you’ve got a team of 25 or so high school players, they might not all be thinking that way, but there’s always going to be some who have that mindset. Taking that idea from them, and providing it to the whole team, is really going to help spread that mindset even further,” Crews said. “Then, next year, there’ll be a different group who are going to look up to that and say, ‘Hey, what can we do this year?’ So, that’s the idea. We’re hoping that they see that because, well, you never know when you’re going to be the one in need, right?”