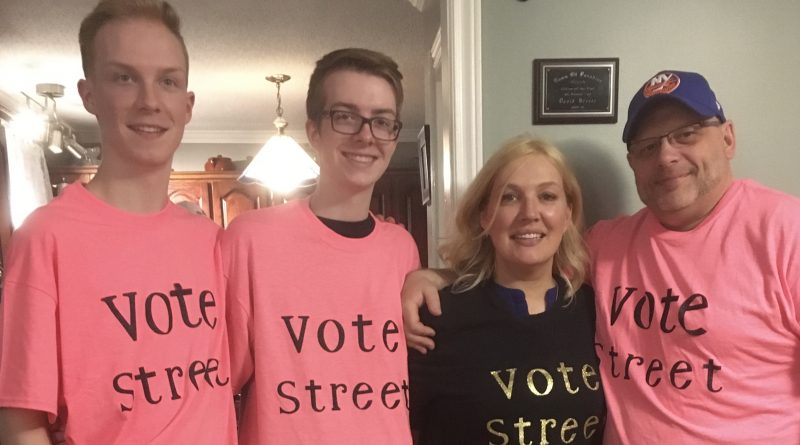 A seat left vacant by former Paradise councillor Paul Dinn, elected to the House of Assembly in February, has been filled.

Weeks of door knocking, sign posting, social media posting, fundraising, and advertising culminated Thursday, May 9, when roughly 10 per cent of residents cast their votes for the Town of Paradise’s newest councillor.

Kimberly Street was raised in Paradise, where she and her husband are now raising two boys of their own. Street raked in 788 votes, the highest among a field of four candidates.

“I was determined. I put 100 percent into it. I used everything that I could possibly use, between print and media and brochures and social media, and I knocked on every door,” said Street. “I pretty much reached 90 percent of Paradise.”

Running for a council position in a town the size of Paradise is as big a venture as running provincially for the House of Assembly. In fact, the municipality has twice as many citizens, and voters, as does a typical provincial electoral district. All four candidates ran strong campaigns. The candidates also had to compete for sign space, and attention, with the various candidates running in Thursday’s provincial election.

“It consumes you,” said Street. “If it’s something that you want to do, you become obsessed with it, and you think about it all the time and you’re constantly working towards that goal. For me it was every single evening and every weekend. My life was dedicated to getting there.”

But, she added, no campaign battle is won alone.

“I had a lot of family and friends support me. You can’t do it alone,” said Street. “I would like to thank the residents of Paradise and I’m excited to work for them.”

Street previously ran in the 2017 Paradise municipal election and earned 1,568 votes, the second highest number of votes for an unsuccessful candidate, after Coreen Bennett’s 1,761 votes.

The runner up in the May 9 by-election was 20-year old Memorial University student Curtis Knee, with 648 votes.

“It was certainly a learning experience,” said Knee, who found himself wrapping up final exams while hitting the campaign trail. “I’ve worked on previous campaigns and sort of had half a clue, but when you run your own (campaign) it’s a lot different.”

Knee said he would certainly run again, and that he was inspired by the number of youth who came out and cast ballots.

Rounding out third place was Coreen Bennett with 580 votes.

“It was a completely positive experience,” said Bennett. “People were very pleasant and engaged.”

And will Bennett be hitting the campaign trail when the election comes around again in 2021?

“I’ll answer that like I answered it the last time, when I ran in 2017: a lot could happen,” Bennett said. “In 2017, I said a lot could happen in four years; who knew that we would be back in the campaign mode again 18 months later. I don’t want to say, ‘Never say never,’ but a lot can happen, and we’ll have to see what happens. What won’t change on my part is I’ll continue to be a member of the community.”

By that, Bennett was referring to her involvement with the Girl Guides of Canada, Canadian Red Cross, and various local Paradise groups.

Tony Kelly rounded out the ballot with 169 votes.

Kelly is currently on vacation but told The Shoreline in an e-mail that he enjoyed meeting with people and hearing their concerns, and that he is ready to run again when the next election is called.

All candidates shared similar sentiments and best wishes for their fellow candidates.

“It feels really good to have won. But I know what it feels like to put 100 percent in, and not get elected too,” said Street. “I’ve got a great deal of respect for the other candidates. This is a big process, and there’s many things you’ve got to do in a short period of time.”

Street will be sworn in during the May 21 public council meeting.