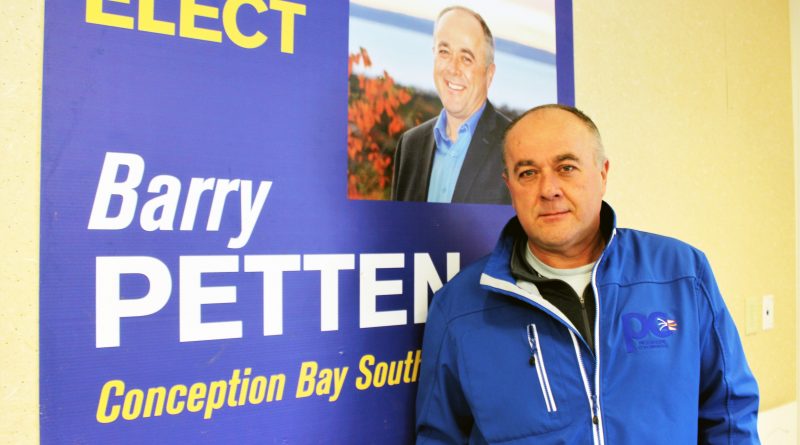 It may be his third election in five years, but Conception Bay South district PC incumbent Barry Petten is just as eager to win his seat as he was in 2014 when he first sought office in a by-election.

If anything, he’s even more eager.

Petten proudly wears the title of ‘lifelong resident’ of Conception Bay South. It’s where he and his wife grew up, and it’s where their children were raised. CBS is home, and he said he doesn’t plan on changing that anytime soon.

It was his love for his hometown, Petten said, that led to his stepping into electoral politics in the first place. Petten had been a long-time grassroots organizer in the party and an executive assistant to then MHA and cabinet Minister Terry French during the Danny Williams and Kathy Dunderdale years. When French stepped away from the seat, Petten saw a chance to represent the people of CBS as the MHA himself. It has been a gratifying experience, he said, and he hopes to be returning to it following the May 16 election.

“It’s a huge privilege. It’s an honour. That’s something I first realized when I was at the House of Assembly being sworn in – one guy said to me to ‘Take this in, because you’re one of 40 people in the province that are given this privilege,’ and he was so right,” Petten said. “Going to work every day, and trying to bring improvements to the people of your hometown? That’s a pretty special job to have. Not everybody looks at it that way, but that’s my sole focus in this position – the people of CBS.”

Petten went on to say that his role as MHA has given him opportunities to not only help his community, but individuals within it. He cited a recent situation where he was able to help a local family resolve a medical issue for their young child.

“You’re not going to be reading about that in any of the papers, or hearing about it on the radio, but myself and that family know what happened, and that’s what it’s all about. This is what you’re doing it for, to better the lives of everyone,” he said. “Anyone that’s getting into this job – heads up, there’s going to be a lot of days you’re driving home wondering what you’ve gotten yourself into. It’s not all roses. But, at the end of the day, when you can make a difference in even one person’s life, then that’s what’s going to drive you to move on and forget about the bad days.”

Petten’s is the only name on the ballot this time that is not new. Alongside Liberal candidate Kevin Baker and NL Alliance candidate Warrick Butler, Petten admitted the sense of familiarity associated with his name will no doubt give him a slight advantage. However, he hopes his reputation, and his accomplishments since first being elected, will be the real factor behind the votes he receives.

Petten said he has an eye on the future of the district at all times, and his own drive to see CBS prosper is what he feels would make him a solid choice for voters again this year.

“When I commit to something, I’m all in. That’s the type of person I am, and hopefully the last two elections can attest to that. There’s no days off with this job, you’ve got to stay committed all the time,” he said.

When asked about some of the issues he’s heard during the campaign, Petten reached to a familiar topic for him – the 1.6-kilometre school bus policy.

The policy makes it so that students are unable to utilise school busses as transportation if they live within a 1.6-kilometre distance from their respective schools.

Petten said the policy is dangerous for the students affected by it, and is one that he hopes to see changed.

“It’s outdated, and makes no sense. I can’t be any more outspoken about it, but it frustrates me,” he said. “You can’t have K-6 children walking these roads with no sidewalks in a lot of cases, or with snow down, or whatever the case may be, because of a policy. That’s not the law of the land, and that’s a policy that can be fixed with some money, and a few adjustments.”
Transportation issues in general are high on Petten’s priority list, particularly some much-needed improvements along Route 60 and the Foxtrap Access Road.

However, one of the things he’s heard loud and clear from residents is what he deems as a lack of things to attract young families, especially when it comes to things to keep children entertained.

Although he says this may be more of a municipal issue, he’s been sure to let CBS council know that it was still one of his own top priorities as well.
“I’m hearing it from a lot of our young families – there’s nothing in the area for their young children to do. We’ve got soccer fields and new arenas, but (not) family-friendly spaces – that’s open, green spaces,” said Petten, explaining that things such as accessible playgrounds and other such facilities are what he’s got in mind. “I think we need a community centre. I’ve said it before, and that’s a commitment that I want to work towards. I know a lot of young families, and if they’re not into sports, or the mainstream things, then what do they do? They could avail of that, for sure.”