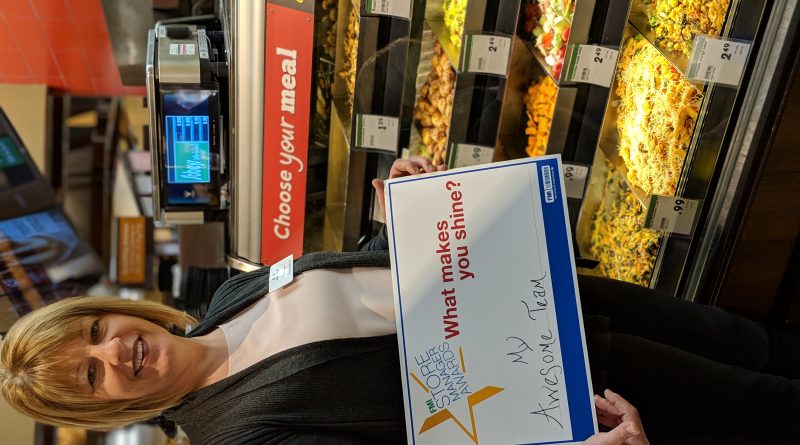 Niki Scott says that she loves her job.

“I don’t even call it work, because I love what I do,” said Scott, Paradise Sobey’s store manager.

“I like to work alongside of people. I’m not one of those managers who sits in my office. You can catch me any day decorating a cupcake, or cutting up fruit, or stocking shelves. That’s what I enjoy about my job, I get to do something different every single day.”

It’s likely that that love for her work played a part in her qualifying for two international awards.

She has been named one of two finalists in the 2019 Food Marketing Institute (FMI) Store Manager Awards – International Category. That contest is broken down into four categories, and of the nine finalists, spread across the four different categories, Scott was the only Canadian, with most other candidates hailing from the USA.

Scott has been awarded a trip to the Future Leaders Conference on May 14 in St. Louis, Missouri, where the winner, who will take home a $1,000 prize, will be announced.

Sales growth, community involvement, and engagement with customers were all factors judged by the FMI in selecting the finalists.

Scott is also in the running for an FMI “People’s Pick” contest, which is open to all store manager awards finalists. You can cast your vote for Scott at www.fmi.org.

The winner, who will receive $500 and a trophy to be displayed at their store, will be named at the May 14 confrenece.

Scott’s been a store manager since the Paradise location opened four years ago, and has been working with Sobeys since 1991, beginning as a part time worker, then moving up to department manager, assistant store manager, and finally store manager.

“It’s a respect thing that works both ways. You treat people with respect, and they treat you with respect back,” she said of her management position.
Community involvement is also an integral part of Scott’s store, with thousands of dollars and food products being donated to organizations such as food banks, Neveah’s Lemonade Stand, and the Children’s Wish Foundation.

“Everyone in Paradise is involved in something it seems like,” she said. “I enjoy giving back to the community. There was a time in my life when the people of the community gave back to me, and I just feel that I have to return that.”

Scott said she is not alone in her efforts, and that her staff are equally onboard with the various community projects and donations.
“They really enjoy volunteering too. I don’t ever have a problem getting someone to volunteer,” she said.

The Paradise Sobey’s will also be celebrating it’s fourth year anniversary on May 7.