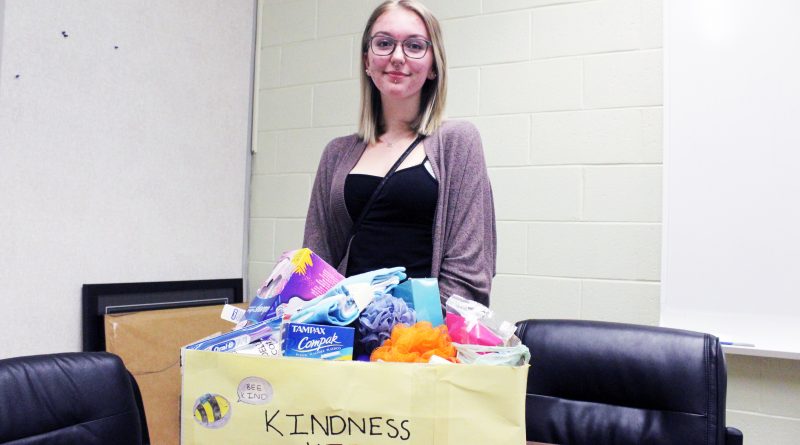 A Holy Spirit High student is collecting for those in need Grade 10 student Meaghan Crickard launched the project with the help of teacher Carina Jardine. Students are invited to donate travel sized toiletries, socks, and feminine hygiene products to create ‘kindness kits’ to be delivered to those in need.

“We always try to do some kind of social justice activity with the kids to help them give back,” explained Jardine, who teaches the school’s social justice and ethics classes. As part of the course, students have to form their own social justice campaign.

But Crickard approached Jardine of her own initiative.

“Before I even got to introduce it in class, Meagan said she would like to do something,” said Jardine.

“I never even planned to do this for my ethics project, I’ve just really wanted to do this for a really, really long time now,” said Crickard. “I think its just so nice to give back, especially to people who don’t have everything that we have. It can be very lonely and very dehumanizing. It would be nice to remind them that people do care and help give them a sense of belonging.”

Students and anyone from the community who wished to donate, had until the end of Easter to drop off supplies. “It would be amazing to watch this grow,” said Crickard.
In the first week, the box was overflowing with contributions.
“It’s really exciting. It’s really cool to see things appear in the box and I don’t know who’s dropping them off. It’s nice to know that people around the school want to help out and want to give back,” said Crickard. “I was even saying to one of my friends a few days ago, it’s like Christmas, but the gifts aren’t for me, they’re for other people.”

Jardine agrees that philanthropy indeed, has its own reward.

“The benefit is not just to the people they’re doing it for, the benefit is what they’re getting out of it,” she said. “Most of them tell you how good they feel when someone thanks them.”

Another benefit, said Jardine, is that the project highlights the need to give to others all year round. “Nobody has a problem donating at Christmas time, but people need things all year around, so this is a nice idea to draw attention to that fact.”

Last year, the school collected items for stockings in conjunction with Thrive, a St. John’s-based organization that helps vulnerable people.
Jardine hopes to strike up a similar partnership again this year.
“We’re a lot better off than a lot of other people, and it’s really nice to see kids wanting to give back,” she said.