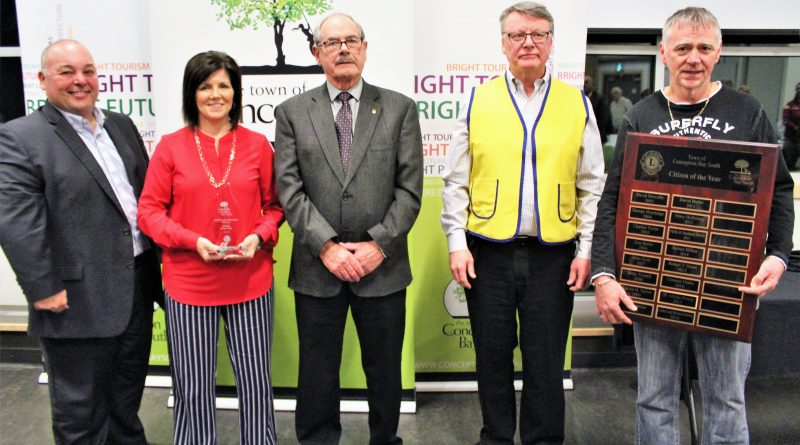 The Town of Conception Bay South honoured some of its most outstanding citizens this past week.

Each year, during Volunteer Week, Conception Bay South dedicates a night to recognizing the efforts of some of the many committed volunteers in the community. During the annual event, two awards are given out by the town – one to the Youth Volunteer of the Year, and one to the Citizen of the Year.
The Manuels River Hibernia Interpretation Centre was filled with plenty of smiling faces on Thursday night as everyone gathered to praise the efforts of names like Jeff Fagan, Enid Haines, and Megan Coles – just three of the nominees up for the two awards being given out that night.

However, it was Emma Jacobs who was named as this year’s Youth Volunteer of the Year, while Louise and Bernard (Bernie) Mercer shared the Citizen of the Year award.

“It’s no surprise that we have a number of outstanding citizens, both young and old, who deserve to be recognized for their hard work and meaningful contributions to our Town,” said Mayor Terry French. “It’s because of our many passionate and dedicated volunteers that Conception Bay South is such a great place to live, to work, to play, and to raise a family.”

Jacobs, who was unable to attend Thursday night’s event, has been an active member of the volunteering community in CBS for quite some time.

At Queen Elizabeth Regional High, Jacobs sat as president of the school council, where she was able to spearhead a number of events and student endeavours, including Christmas at Queen E, the Social Justice Club, and the Students for Change group.

Jacobs has also been heavily involved in the CBS Leo Club for a number of years and works with the Refugee and Immigrant Advisory council, where she can be found teaching new Canadian immigrants to speak English.
While juggling all this, Jacobs is making her way through the final gold level in the Duke of Edinburgh Awards Program.

The Citizen of the Year Award was slightly amended this year to accommodate two deserving nominees, who have inspired people throughout the province with their courage, grace and selflessness.

Since suffering the losses of their children Riley and Alex Mercer through separate but related illnesses, the couple have dedicated their time to giving back to the community through a number of fundraising efforts over the years. The intention was both to honour the bravery and memories of their children who fought cancer and to thank the many people who offered the family support during their trials.

Perhaps one of the most successful of their events has been the ‘Ride for Riley.’ Together, Bernie and Louise, who sit at the forefront of this fundraiser, have raised approximately $60,000 for the Jack Hand Legacy Foundation. And each year, during the holiday season, there is some $10,000 worth of toys collected from the family’s annual ‘Riley Mercer Toy Drive.’ The Mercers also collect food for local food banks on a yearly basis with their ‘Spirit of Alex and Riley Food Drive.’

The keynote speaker for this year’s awards ceremony was Carissa Haines, the Youth Volunteer of the Year award recipient in 2015. She spoke on what keeps her volunteer fires burning. As an example, she cited a trip to Mexico she was a part of thanks to her involvement in Girl Guides Canada. During that trip she taught an origami class, but found herself faced with a slight issue when she could not properly communicate with the group members who spoke little to no English.

“Near the end of the event, a young man came to sit next to me and work on his origami. As he sat there, he started speaking some English to me. He said he was learning in school, so we spoke to one another in very broken English. A few minutes later, he tapped on my shoulder and said ‘I love my life.’ Here I was, instructing a simple origami class, and someone looked at me and said that. Needless to say, I had to hold back my tears. It’s for this reason that I volunteer,” Haines said. “I volunteer, because of how it makes other people feel … Always volunteer for the right reasons, and for the causes that you are passionate about. If we all do our part, we’ll be able to work together to lift Conception Bay South to become an even brighter town, with an even brighter future.”