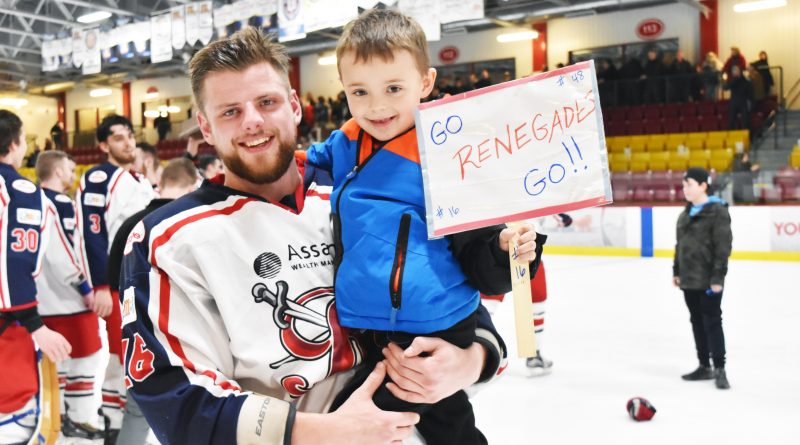 After nine seasons in the league, the CBR Junior Renegades brought home a championship title this past weekend.

It came in a dramatic finish at Jack Byrne Arena in Torbay against the defending league champions Marks Mount Pearl Blades with a 3-2 win in double overtime in game seven of the hard-fought series.

Head coach John Baldwin said the victory was actually the culmination of an effort that started last season when the burgeoning Renegades looked as if they might claim their first title then. But after five tight games, the Renegades ended up losing that championship series to the Blades, which helped fuel the determination of the players this year.

“This group of kids, for the most part, were there last year when we lost,” said Baldwin. “It was a building process for most of these players, to try and take the sting out of last year’s defeat.” Baldwin said. “That commitment kind of lead into this year’s hockey season, and we found ourselves asking ‘Where are we going to be? Are we going to be bridesmaids again, or are we going to take this and make it our turn this time?’ And that’s exactly we did, that was our team commitment this year. It was our turn.”

Going into the final series, Baldwin said the players knew they were in for a challenge from the swift skating, fast passing Blades. Mount Pearl had bested the Renegades in four regular season games earlier this year, albeit not by much. Baldwin said those contests, despite being losses, served as great learning opportunities for the players to get a feel for what they should expect going into the championship round. It was up to the Renegades to make a comeback, which they did in the fast-paced final series.

“For the team as a whole? This is awesome, it really is,” said Baldwin. “To have that defeat last year and turn it into a victory this year, the first time CBR junior hockey ever won that junior league title? Huge.”

Drew Stonehouse of the Renegades had all eyes on him as he took the game-winning shot in double overtime, netting the Renegades their title. Baldwin said that during this game, especially once it turned over for a second overtime period, everyone was saying their prayers to the hockey gods for a stroke of good luck. When that prayer was answered by an open opportunity to score that final goal, Baldwin said it was unbelievable to watch.

“You’ve got a player with a helmet off, and a player jumps out over the board with fresh legs. He picks up a loose puck and goes in on a breakaway and scores … It’s almost surreal. It was unbelievable really,” he said.

However, this all tied in with the Renegades’ game plan against the Blades.
“We were a deeper team, and we knew that. Our whole system was to keep wearing them down. Just ‘Wear ‘em down, wear ‘em down, they don’t have the legs to keep going, eventually, we’ll get our break,’ and we got it,” Baldwin said.

Going forward, the Renegades will represent the province at the Atlantic Junior B championships in P.E.I later this month, where they’ll compete for the Don Johnson Memorial Cup. Baldwin said that although the team is riding the hype of winning here in the province, they have not yet forgotten the road doesn’t stop here.

“We will be a serious player in that tournament. Mount Pearl lost in the championship game there last year, and we feel that we have a stronger team this year than they did last year,” Baldwin said. “We’re really hoping that we’ll take that trophy home with us when we get back from P.E.I.”