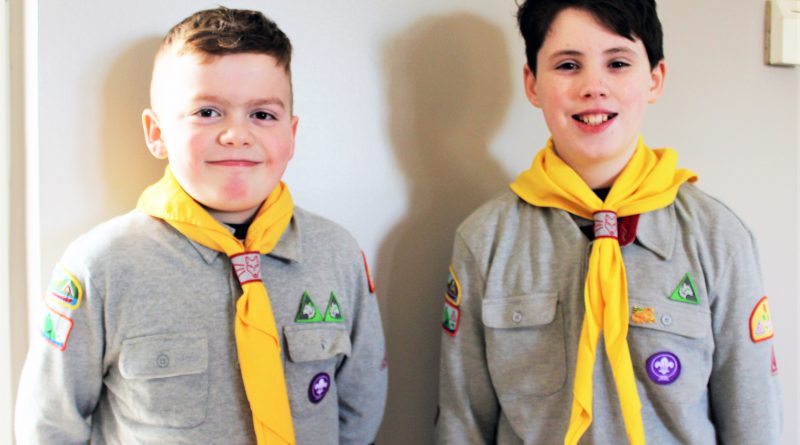 Ben Bishop, 10, and Sebastian Coombs, ‘10-and-three-quarters,’ have been close friends for as long as they can remember.

They’re progressing through elementary school together, play hockey against one another, and are moving their way up through the ranks as cub scouts together as well.

The two boys are now in their final year of cub scouts with the 1st CBS Scout Troop, and, in order to advance to the rank of scouts, must achieve their Top Award – the Seeonee.

The journey to attaining this goal sees young cub scouts complete at least 10 outdoor adventure skill stages, as well as 15 hours of community service in either scouting or non-scouting activities. On top of this, the boys are expected to carry out a meaningful service project, which they can do as a team or on their own.

Given their longstanding friendship, Ben and Sebastian, two fifth-grade students at St. Edward’s School in Kelligrews, both agreed that it was almost a no-brainer to do the project together.

Both boys have a strong connection to rescued animals. Sebastian pointed out that plenty of his pets, namely his cats, were rescued. With this connection in mind, the boys decided it would be worthwhile to raise money for some local animal rescue organizations, namely Rescue NL, and Forget Me Not Rescue.

“Basically, all my pets are rescues, like my dog that we got from Beagle Paws. Both of my cats are rescues too,” Sebastian said.


The fundraising went very smoothly, according to the boys.

“The amount we raised was $534. That, plus all the food we collected, it’s probably somewhere around $700,” Sebastian said.

To raise the money, the boys took to Sobey’s Supermarket in Long Pond one weekend earlier this month, standing outside the store to inform shoppers of their project and goal.

It took only two hours for the boys to collect the $534 on Saturday morning. The following weekend, they presented the donation to both Rescue NL and Forget me Not Rescue – something that both boys said filled them with pride.

“They were amazed. They were really amazed, and that made me – us – feel good too,” Sebastian said, with Ben nodding in agreement.