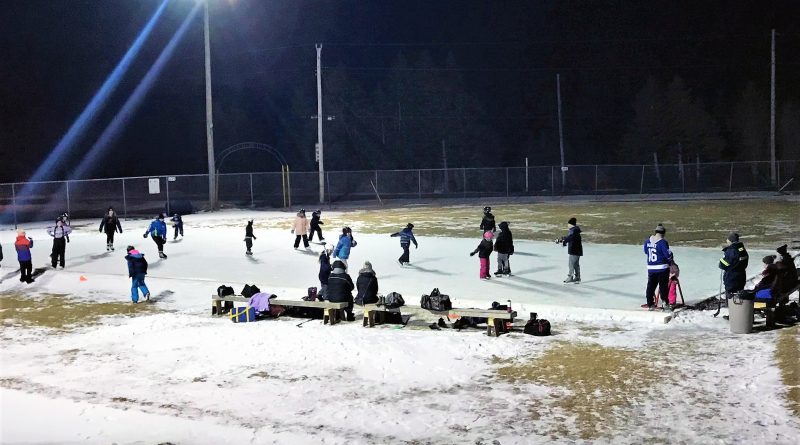 Some people in the Town of Avondale have been taking advantage of the cold weather in the best way they know how.

In recent weeks, the province has experienced temperatures even colder than most Newfoundlanders are used to, banishing many residents to the warm shelter of their homes to wait out the weather.

That’s not quite the case in Avondale, however. The community has experienced just as much cold as the rest of the province, but has instead decided to use it to their advantage by setting up a public ice rink at the town’s ball field.

Pat Doyle, a part of Avondale’s recreation committee, said the idea had been tossed around a number of times over the years. It wasn’t until last year, though, that the town decided to act on the idea, purchasing a 100 x 50 foot tarp to act as the base of the rink.

“We put it right on our ball field, which allowed us to use the ball field lights, so that worked out well,” Doyle said.

“It’s been something of a community project, because people have been just so supportive of it,” he added. “We’ve had really nothing but compliments ever since it started, which is really great. We’re a small community, so we’ve been trying out some small projects just to try and get people involved, and so far, this one seems to be working.”

Doyle said that there are many children in the community involved in minor hockey, or figure skating. While the rink would serve wonders for those children, Doyle explained that hockey players and figure skaters are already well accommodated in the region, in both Conception Bay South and Bay Roberts.

The rink in Avondale, he explained, was geared more towards children looking for an after-school activity, looking to learn how to skate, or simply a new reason to go outside. On weekends, people have come from as far as St. John’s for a skate on the rink.

Ever since the rink’s construction, Doyle said, the community has been nothing short of supportive. Although the recreation team managing the rink is small, he said there has been minimal work for them to keep up the ice, in part due to the respect shown the facility by its users.

“We leave some scrapers there in the dugouts, and people have been taking it upon themselves, while they’re there, to scrape the ice if they think it needs scraping,” Doyle said. “Other than that, it’s just a matter of fixing small cracks or things like that in the ice. That’s about the biggest piece of maintenance we have to do.”

Friday, March 1 marked 50 days since the rink was opened to the public and has stayed open. Doyle said the plan is to keep the rink operating and available to the public for as long as weather permits.

“We had hoped for maybe 20 or 30 days. We thought that would be pretty good. But, we’re hitting 50 days now, so things are going really well so far,” Doyle said, allowing that Mother Nature has lent a hand on a number of occasions in maintaining the ice.