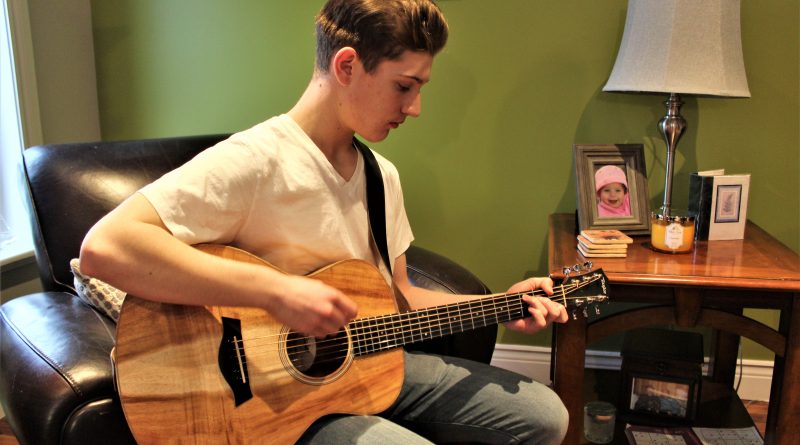 Darcy Scott is making waves in the local music scene.

The 15-year-old is no stranger to the feeling of a guitar in his hands. He’s just as at-home behind a set of drums, or even a microphone in the studio.

For as long as he can remember, Scott says he’s had something of an affinity for music, specifically behind the drums. At the age of five, Scott began taking lessons to improve as a drummer. It was this role atop the seat of his drum set that he focused on for a number of years.

“I used to be over at my nan and pop’s house as a young kid with metal bowls, pots, and spoons, and I’d be sitting on the floor just banging on them for hours,” Scott said, chuckling. “I always had this sense of rhythm. Drums were my primary focus for a long time, and I did a number of Long and McQuade rock camps and got to meet a few people through that.”

It was at one of those camps that Scott met brother and sister duo Emily and Thomas Conway, who perform as the two-piece Celtic-oriented band Conway.

Scott would go on to provide his skills as a drummer to Conway, performing alongside them whenever the opportunity would present itself.

However, it wasn’t until a few years later that Scott decided to expand his musical talents.

“I guess I always wanted to try and pick up another instrument,” he said. “I always knew I wanted to step out from behind the drums and try to get more into doing my own stuff. I wanted to pick up a guitar, and try singing. Just playing the drums on your own can be kind of hard without a full band. I knew that having a guitar, and knowing how to sing, would help me do my own solo thing. I can get out and do a lot more as a musician that way.”

Now, with a solid understanding of his own vocal range, as well as a knack for the guitar, Scott has managed to find a place for himself in the Newfoundland and Labrador music scene.

Over the years, Scott has performed at the Newfoundland and Labrador Folk Festival, the Brigus Blueberry Festival, and George Street Festival among other events, and has also participated in the “So you think you’ve got talent” competition at the LSPU Hall in St. John’s for several years.

Scott has also landed himself a seat as a regular performer at Coleman’s Supermarket on Newfoundland Drive.

Most recently, Scott threw his name into the mix in the CBC Music Searchlight Competition. Although his entry did not make it all the way to the final top 10, Scott felt as though the competition was a great means of spreading his music to new fans across the country, aiming to get his name out there as much as possible.

“I’ve always had a drive for learning new things. On the guitar, for example, if I feel like I can’t write something the way I hear it in my head, I’ll just keep working at it until I get it,” said Scott.

“Once I get that figured out, I get a little more motivation to keep doing more and more.”

Scott admitted his passion for music keeps his interest going.

“The feeling I get when I get off the stage after playing anywhere, and when I have people coming over to me and telling me how much they loved the music – that’s what pushes me to keep going and playing music,” he said. “I love it. That’s why I want to get my music out there for as many people as I can.”