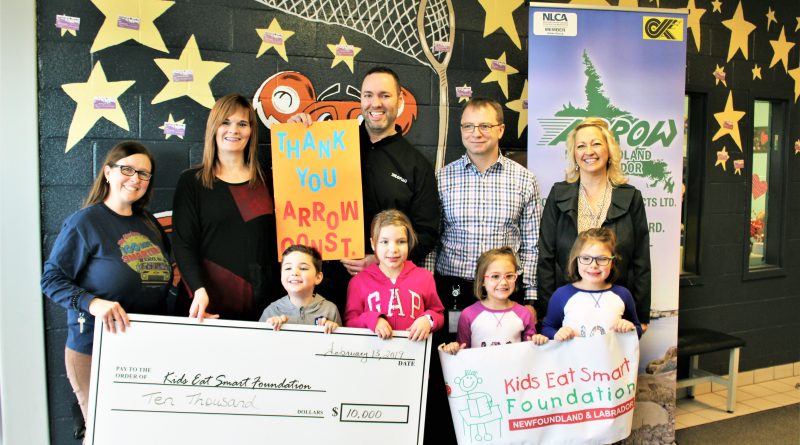 Arrow Construction Products Limited is a supplies distributor with locations scattered across eastern Canada. However, it’s not just the distribution of construction supplies that the company is becoming known for, as they’ve made sure to contribute back to their surrounding communities over the years with considerable donations to a number of organizations.

This time around students at Topsail Elementary are the beneficiaries.

“Our company has donated a lot of money to different charities over the years. About six or seven years ago, I started requesting some donations for kid’s breakfast programs in Atlantic Canada,” explained Cory Brocklehurst, one of Arrow’s territory business managers. “When we came across Kids Eat Smart, we found out that they match every dollar donated, so it was a no brainer from there.”

Brocklehurst said in the past the company has donated to St. Edward’s and St. George’s in the west end of Conception Bay South, as well as a number of schools on the west coast of the province.

On Wednesday, Feb. 13, Arrow, alongside the Kids Eat Smart Foundation, made a trip to the school to give out breakfasts to young children and to make the $10,000 donation – a number that was doubled to $20,000 after Arrow’s initial donation was matched by Kids Eat Smart.

“It’s an amazing program, and we’re super happy to see it work out this way,” Brocklehurst said. “We’re not a huge company or anything, but we do this for all of Atlantic Canada, so we’re all really proud to be a part of this.”

Brocklehurst noted the owner of Arrow Construction Products, Edgar Goguen, has never failed to express his generosity over the years, with this particular donation being only one of many the company has made.

“He’s always been the type of person to go and donate a lot of money, always giving back to communities and things like that,” Brocklehurst said. “He’s extremely generous, and when I first started with Arrow, we were donating to places like the Children’s Wish Foundation and other organizations like that. Each territory manager gets $10,000 to donate to a charity, and so this is the one I chose.”

After seeing the sizable donations made possible through the Kids Eat Foundation, Brocklehurst said other territory managers have begun to work with the foundation as well, ultimately increasing the number of donations made to breakfast programs in Atlantic Canada.

“It’s great to see. A $20,000 donation means 20,000 breakfasts for kids who might have gone hungry in the mornings without it,” said Brocklehurst. “It’s crazy to think about, but makes you realize exactly why we’re donating this kind of money.”