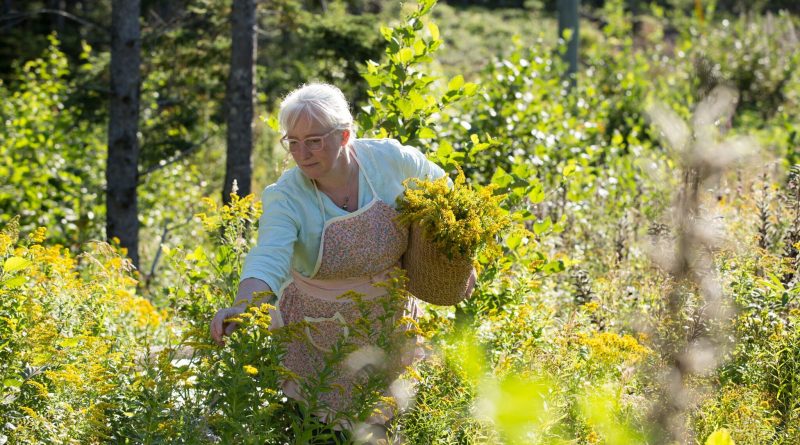 Susan Furneaux has been crafting for as long as she can remember, and the province of Newfoundland recently recognized her lifelong endeavour.

Hailing from Conception Harbour, Furneaux – a textile artist with a unique connection to nature – makes up one half of Black Hen Studio alongside her art-partner Michael Harlick, who focuses on metalworking.

Furneaux’s interest in the arts began at an early age. She says she can hardly remember when she first learned the basics of crafting. However, Furneaux was trained professionally in crafts and textile art in her twenties and has been happily involved in the crafting scene ever since.

Furneaux also teaches her craft to students at the College of the North Atlantic in the Textiles: Craft and Apparel Design program. Her home in Conception Harbour borders the woods. She lists nature and the great outdoors as one of her biggest influences in her artistry and relies on the bounties of nature to create her unique pieces.

“My inspiration comes from my surroundings in Newfoundland, and the boreal forest in general. My interaction, and human interactions, with the forest, and how we live alongside nature is a big inspiration for me, both visually and theme-wise,” Furneaux explained.

The artists also keeps a small number of animals on her property, which serve as even further inspiration for her work. “I get my colour from the land as well – I pick all my own colour, create dyes with it, and I also grow my own dyes if it doesn’t grow here locally, like indigo and bedstraw and things like that,” she said.

On top of this, Furneaux makes use of just about everything nature has to offer when it comes to her craft – right down to the bones.

Recently, one of Furneaux’s works, titled “#momsboy,” was purchased by The Rooms through the provincial art bank program.

This program, started back in 1984, aims to provide economic benefit to artists in the province, all while promoting the cultural heritage of Newfoundland and Labrador. As of 2018, the collection has seen approximately 3,000 pieces by some 250 artists over the years to be showcased at The Rooms, or within government buildings and public offices across the island.

The piece in question was one of some 31 artworks obtained through the program this year, and there was no mistaking Furneaux’s signature style. #momsboy” was created using tanned rooster hide, natural dyes, hand embroidery with metal threads, sheep’s teeth, and antique lace.

“When the spanworms came a while back, I was making dye out of the spanworm frass. I found then, that people either loved it or hated it,” Furneaux said, admitting in the past she has received criticism for her use of animal parts. “I used to make these little figurines, and I used to use rat bones and things for their weapons or tools. People loved the little dolls, but when I told them what I used, they’d recoil, or they’d be fascinated. There was seemingly no middle ground.”

In recent years, however, the general opinion on her work has become much more positive, she said.

“I guess it comes hand-in-hand with the whole idea of sustainability, or nose to tail butchering, and things like that,” said Furneaux. “People don’t have the same kind of feelings towards it anymore. They accept it a lot more. I think that’s because of this whole move towards not being wasteful and being more mindful of the environment that’s come about in the last few years. My work kind of encompasses all of that.”

More of Furneaux’s work can be viewed on her studio’s website at www.blackhenstudio.com.