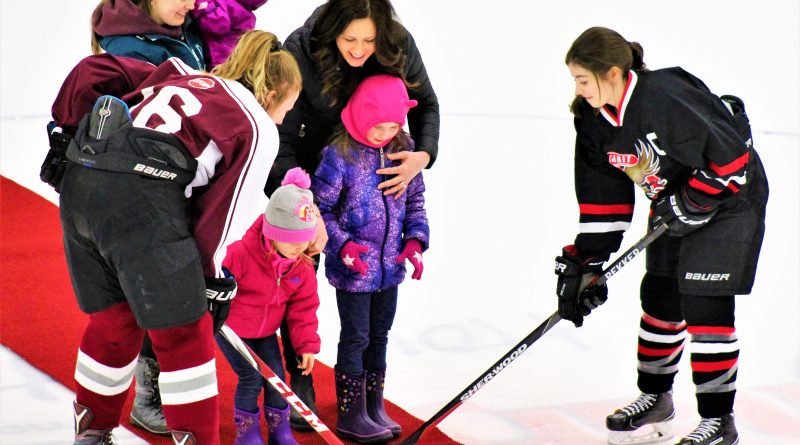 Annie Parsons was a familiar face to hockey players in the CBS area, and her name lives on each year during Winterfest.

Watching from the stands, as always, was Scott Parsons – the sixth of Annie Parsons’ seven sons.

Annie Parsons was born a Morgan in Seal Cove, where she and her husband both played major roles in various sports. Annie, in particular, was very active and supportive of minor hockey in the region – something her sons well appreciated.

“There were a lot of ponds around Seal Cove,” said Scott. “I got my first pair of skates when I was six-years-old, and my brother Richard Jr. was a fabulous hockey player. When they developed minor hockey here in Conception Bay South, my brother Robert and I played then as well. Hockey’s been in our family for as long as I can remember.”

The Parsons family, namely Annie and her husband Richard, would often fundraise for hockey teams in the region, hosting awards banquets set up for the teams, complete with turkey dinners and all.

“It was all done as if they were professional teams playing for major leagues,” recalled Scott Parsons. “It was all well planned out, and I think it meant a lot to the teams, for sure. They (my parents) put an awful lot into the local minor hockey system here in Conception Bay South over the years.”

Parson’s parents, who also founded a successful, long running bus line, were also perennial sponsors of sports events and teams on the shore. Parson’s dad, who transported young hockey players to and from the rinks in St. John’s aboard his buses before CBS got its own stadium, was as familiar to some local hockey players as the heroes they watched on TV.

While Scott admits that the shield games could have easily been named after a number of other influential figures in the local hockey scene, he and his family are grateful to see Annie’s name and legacy memorialized by the games each year.

“It could have been called the Dot Bishop Shield, or the Mrs. Fagan Shield, or the Mrs. Batten shield – there are lots of people in this town who have given a lot of time and dedication to the sport,” he said, reminiscing on moments from his own minor hockey days where those women would go above and beyond, even knitting individual stocking caps for the players. “It was just the thing to do – to support minor hockey, and hockey in general. There wasn’t a lot on the go at the time, so they put their time into this. All these ladies deserve to be honoured, and my mother was among those that did whatever they could for minor hockey.”

Sometimes that attention could be a little too much, he admitted, smiling.

“My mother would go to all the games at Prince of Wales Arena, and it was embarrassing at times because she’d be the only one to call you by name. If I had the puck, you could hear her yelling ‘Come on Scott!’” Parsons said, laughing as he recounted the experience. “But it was fabulous. She loved hockey, and my father loved hockey. They were a good match that way, and it showed.”