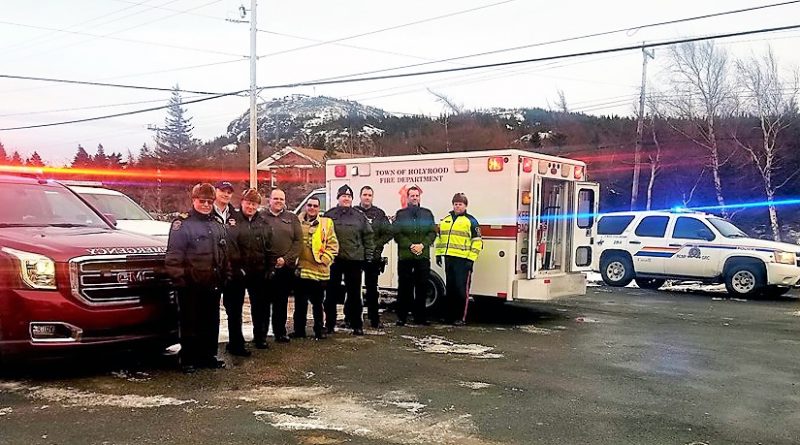 In a show of support for a group best known for helping others, members of the Holyrood RCMP managed to raise approximately $600 for the Community Food Sharing Association last week.

After a fire blazed through the Community Food Sharing Association’s warehouse in mid-January, many people from neighbouring communities got together to try and re-stock the shelves. Included in this were the Holyrood RCMP officers, who partnered with members of the Holyrood Fire Department and staff with the Town of Holyrood to stage a food drive outside the Town Hall last week.

Richard Marshall, Staff Sergeant with the Holyrood detachment, said his officers and civilian employees felt the need to help out.

“It was in support of the Community Food Sharing Association, who do so much for the people living in this province by supporting food banks all over Newfoundland,” Marshall said. “Once (the Holyrood RCMP) heard about the fire, we decided to make contact with the town to try and get something together to help out as much as we could… The RCMP, as well as the fire departments, and the town, and the food banks, we sometimes deal with some of the most vulnerable people in society. So, it was a pretty quick decision to come to. We knew we needed to help, and that’s what we set out to do.”

All parties involved in the drive spent the majority of last Tuesday evening standing outside the Holyrood town hall where they collected over $600 in cash donations, as well as a significant amount of non-perishable food items. Marshall estimated the food donations to be worth approximately $1,000.

“We filled up the back of one of the fire department’s vehicles,” Marshall said. “It was very much appreciated, the support that the town and community showed for the food drive. Everyone was very appreciative of it, and when I notified the people over at the Food Sharing Association, they were nothing short of grateful. Really, it was the least we could do to help.”

The Holyrood Volunteer Fire Department transported all of the donations to the Food Sharing Association that week, Marshall added.