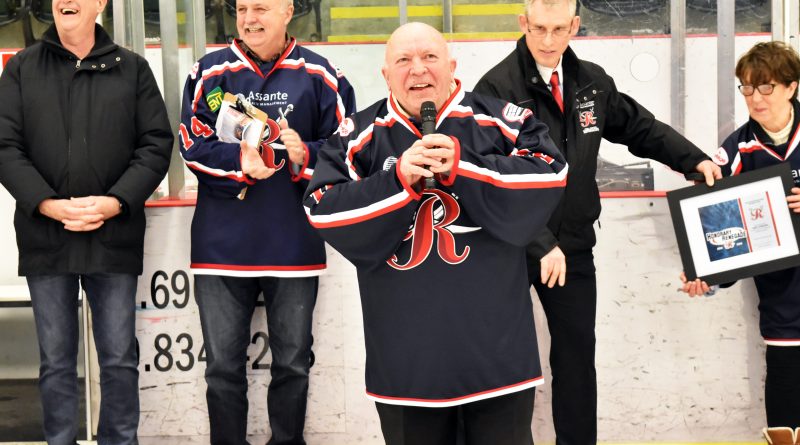 There may be no shade left on the dome and the spring in his step may have slowed a little, but CBS Sports Hall of Famer Mel Strong still has a passion for the game of hockey as he exhibited Saturday night after being inducted as an honourary member of the CBR Junior Renegades.

The team used the occasion of a game against the Mark’s Mount Pearl Blades to decide first place in the league standings to present Strong with an Assante Wealth Management jersey as other former honoury Renegades and local politicians joined him on the ice.

“Mel has served the town well,” said Gillard. “He has served hockey in this area for over 40 years as a long time, dedicated volunteer, who loves to give back to the community. One of Mel’s proudest moments was to be named into the CBS Sports Hall of Fame as an athlete and builder in 2001. You can still find Mel at the CBS rink most weekends cheering on his beloved CBR Junior Renegades.”

Strong showed up for the occasion sporting a CBS Raiders team coat from the 1980s. He said he was humbled and honoured to be recognized by the Renegades organization.

Strong said he understands the challenges that an organization faces in assembling the components needed to make up a good hockey team. “My hat is off and I congratulate the organization that is behind the CBR Renegades,” he said. “It’s second to none and it befuddles me why this place is not filled every night, because the St. John’s Junior Hockey League is the best hockey that you can find today in Newfoundland, it is just fantastic.”

Avalon MP Ken McDonald seconded Strong’s thoughts, thanking the team’s executive for making the organization what it is today. “But I want to say to the organization that you couldn’t have picked a more deserving person than Mel Strong,” said the MP. “He has dedicated years and years of his life to the development of hockey in Conception Bay South.”

CBS town councillor Darrin Bent also thanked Strong “for a lifetime of dedication, not only to the sport of hockey, but to the town of Conception Bay South in building such a great organization here, basically from the ground up.”

Bent said it takes untold hours of time and dedication to make something work really well. “And I think the product we see on the ice here this year is a culmination of the efforts Mel and his colleagues and helpers have put together over the years. So, thank you for that.”

Along with a Renegades jersey, Strong was given a plaque which was presented by fellow inductees Parsons and Noftle. Afterwards, he was asked to drop the puck for a ceremonial face-off with the captains of the Renegades and Blades. Melanie Rogers, a Grade 10 student at Holy Spirit, sang the national anthem and the Ode to Newfoundland to start the game.