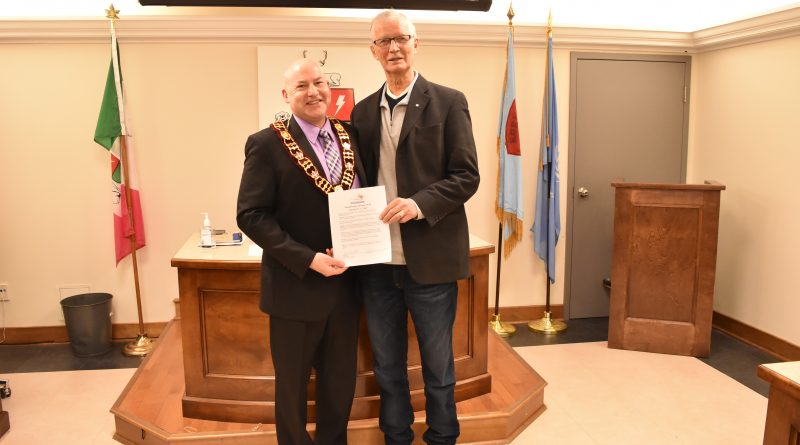 Paradise council was given an update last week on efforts to fight eating disorders in the province.

It was given by Vince Withers, the chairman of the Eating Disorders Foundation of Newfoundland and Labrador, who has dedicated his life since retiring from the business world to raising awareness about the disease and to helping young people and their families cope with the risks and stresses associated with it.

Withers explained there are various types of eating disorders, but most involve either anorexia or bulimia. Anorexia, simply put, is a fear of food, he said. Bulimia involves binge eating.

There are websites that actually promote improper eating, and some that even claim it’s a teenage thing that young people grow out of, he added. In fact, an eating disorder can kill you, he said.

There’s about 22,000 families dealing with someone who is hurting from an eating disorder, Withers added. “It’s probably the most serious mental health disorder of all mental health disorders,” he argued. “It’s misunderstood because of fear, blame, a lot of families feel it’s their own fault, and of course it’s not their own fault. It (primarily) affects the age group of 12 to 23, 80 per cent of whom are young women, 20 per cent young men… A family suffering from someone with an eating disorder is going through perhaps the most difficult time in their life. It’s an horrendous experience.”

A young person with an eating disorder can be passive in one instance and aggressive the next, Withers said.

“The big issue is families are having to try to understand how to cope with that kind of personality change,” he said. “The foundation’s job is to educate families to be able to cope with these issues… And it can take up to seven years for somebody to properly recover from an eating disorder. The foundation this year will probably talk to 1,500 families. When we started the foundation in 2006, and I was there by myself at that time, people would call and not their leave their name or their phone number or their e-mail because of blame and shame. Today families are coming forward in large numbers. This week we’ll have 20 families in our boardroom talking amongst themselves about the issues that they are facing, which is a long way from total denial.”

For some young people, an eating disorder represents their way of trying to cope with life’s stresses. “It’s extremely difficult today to be an adolescent,” Withers said. “And they are having trouble coping. You have peer pressure and bullying, (issues such as) whether to go to university or not… My experience tells me something really important… Adolescents today are doing things today that most of us didn’t do until we were 28 and 30. They are living the lives of very mature people without having the experiences that we’ve had.”

Withers said the good news is that progress is being made in terms of educating society about eating disorders and treating them, but for the people going through it, the disease is still pretty awful. “If you have somebody in your household with an eating disorder, it’s so extreme – not eating, not eating a certain food, not eating with the family, binging, finding a washroom in the house where nobody can hear you (throwing up), those kinds of things,” he said. “Families have to deal with that and it’s extremely difficult.”

Withers said while society is making progress in that it’s easier for people to find help and that hospitals are better set up now to offer treatment and care, “We have a long way to go.”

After Withers’ presentation, Mayor Dan Bobbett signed a proclamation declaring February 1 – 7 as Eating Disorder Awareness Week in the Town of Paradise. “It’s a very serious illness,” agreed Mayor Bobbett. “I’d like to commend you on your advocacy and education and bringing awareness to this serious illness.”