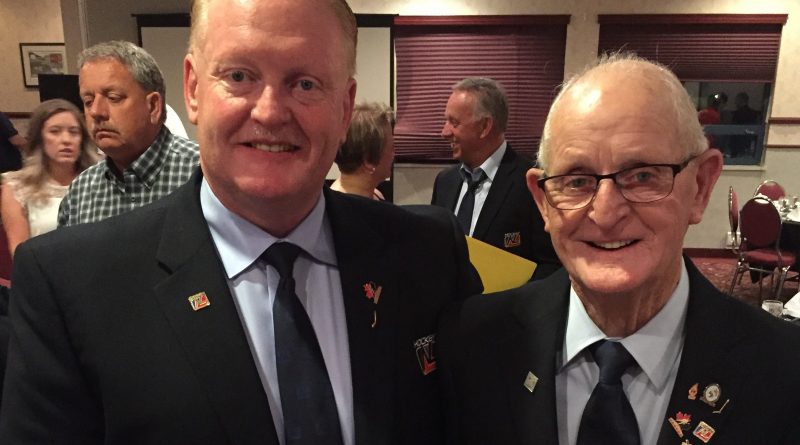 Provincial minor hockey chairman is CBS native who has served at every level of the game.

**Photo: Arnold Kelly, left, smiles with his father, Gerry Kelly, right, at a HockeyNL awards banquet. Kelly, the second longest serving chairperson of HockeyNL, credits the work done by his father and the numerous hard-working minor hockey volunteers he grew up with in Conception Bay South with instilling him with the spirit of helping with provincial minor hockey.**

Like many dedicated minor hockey volunteers, Arnold Kelly got his first taste for the game on the ice. Only Kelly has carried it a bit farther. From a high scoring all star winger known for a blistering slap shot in his youth, Kelly has gone on to become a coach, organizer, minor hockey association executive member, and soon to be longest serving chairperson of Minor Hockey for all of Newfoundland and Labrador when his term concludes in two years time.

The Cherry Lane, Conception Bay South native, who now lives in Happy Valley – Goose Bay where he works as an air traffic controller, credits his interest in the off-ice organizing activities of hockey to a previous generation of minor hockey volunteers in his hometown, who exemplified the energy and selflessness it takes to make sure that what happens on the ice stays fun for the thousands of children who play Canada’s national game.

That group includes his father, Gerry Kelly, who was a founding executive member of the Holy Spirit School minor hockey program and the Conception Bay Regional Minor Hockey Association.

“I was coached and mentored by a lot of good people in Conception Bay South when I was growing up,” said Kelly. “I had a great group of adults that kind of led me down this path.”

Kelly started coaching when he was still a minor hockey player. It began a long career of volunteering in minor hockey spanning decades. His various roles on minor hockey executives alone span some 20 years.

Kelly’s first took on the role of provincial chairperson in 2011, after having served as vice-chairperson for two years beginning in 2009. Previous to that he served as Hockey NL’s northern director for a year in 2008, following up on a tenure as president of the Lake Melville Minor Hockey Association in 2003. Four years prior to that, Kelly held roles as registrar and division chair with the same organization.

Hockey sees him travelling the island and Labrador on business promoting the game and managing the many duties and issues that are part and parcel of Newfoundland and Labrador’s minor hockey program. Admittedly, all of the travel keeps him rather busy, but it’s anything but work for him.

“I wanted to give back,” said Kelly, when asked why he continued pursuing roles with HockeyNL throughout the years. “I saw the group of people that made it possible for me to go play hockey, and I know how much effort and work they put into it, because I saw it every day. I just wanted to be able to give back at some level.”

Of course, volunteering with minor hockey doesn’t come without challenges. At times, it can be a thankless job for the many volunteers and hockey parents who work tirelessly behind the scenes. Just ask a referee or coach who has been yelled at by an irate spectator or fan in the stands. But Kelly said the benefits of volunteering outweigh the challenges.

To this day, Kelly is quick to pass a lot of the recognition for his volunteer work onto his parents Gerry and Angela, and the work done by the Holy Spirit School Minor Hockey Association in his youth. That group included over 40 members, all of whom succeeded in planting the seed which grew into today’s minor hockey programs in the CBS-Paradise region. Kelly also pointed to the support of his wife, Liz, for encouraging him to take on his various volunteer efforts with provincial minor hockey.

“They’re the people who got me on this path,” said Kelly.