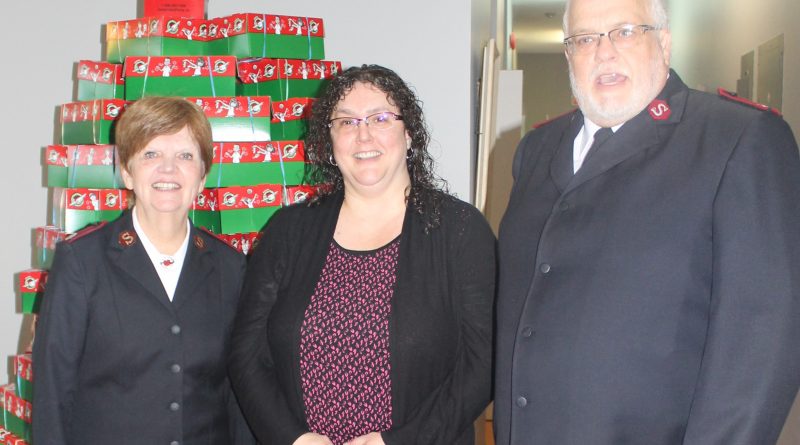 In the Fall of 2010, at The Salvation Army CBS, Coralie Dodge took on the responsibility of being the church coordinator for the collection and delivery of Shoe Boxes for Operation Christmas Child, which comes under the ministry of Samaritan’s Purse. This is a Christian organization, directed by Franklin Graham, son of the late Evangelist Billy Graham.

Coralie could never have imagined how this ministry could impact so many lives, including her own. For the first few years there was a gradual increase in the number of boxes being collected at the church, which was commendable. However, in 2011 and 2013, Coralie was privileged to travel to Costa Rica and Uruguay, and actually placed the boxes into the hands of precious little children. This has made all the difference in her life. To see a child smile, because he received his first toothbrush or to see the smile on the face of a little girl as she looked at the photo of the family who packed a box for her all the way from Canada! This challenged Coralie to do more.

Since then, she has put her heart and soul into this project. She has seen poverty, first hand. She has seen hungry children, sometimes neglected and unable to attend school, because they lack the proper clothes or the much-needed school supplies. She has met grandmothers who care for orphaned children, and other children trying to look after their younger siblings, because parents are no longer there. There are no government agencies to help and give assistance. Many times, these people are left to fend for themselves.
So, Coralie considers it a real privilege and an honor to prepare and distribute these small boxes, which may seem like very little, but a shoe box brings a smile from thankful hearts. With each box that is delivered, a little booklet, written in the local language, is included. It explains, in simple terms about God’s love for little children.

For the past few years, Coralie has been on a mission. She has had a real passion to fill as many boxes as she possibly can. As soon as one collection is completed, she begins buying for the next year. She has become an avid bargain hunter. Following seasonal holidays, and special events in various retail stores, she will diligently visit as many places as possible, and search for marked down items. Sometimes she returns a number of times, hoping for the lowest bargain price. Hot on her list of purchases are boxed crayons, soaps, toothbrushes, facecloths, pencils, erasers, and novelty toys, articles of clothing and pencil cases, which she fills with school supplies. She rarely buys items at regular prices.

For a number of years, in order to offset some of the expense involved, she took a second job to cover some of the costs involved. However, in 2015 she was diagnosed with cancer. Thankfully she has fully recovered, but she has had to curtail some of her activities.

This year, in October, the Senior Youth Group with their leaders met together to help Coralie fill 550 boxes with all kinds of items, which she had purchased during the year. She is so thankful to all who helped in packing and delivering the boxes and to those who made donations as well. She is seen in the photo with Majors Lorne and Barb Pritchett, Corps Officers at the CBS Corps. The “Tree of filled boxes” is one of several that were displayed throughout the building.