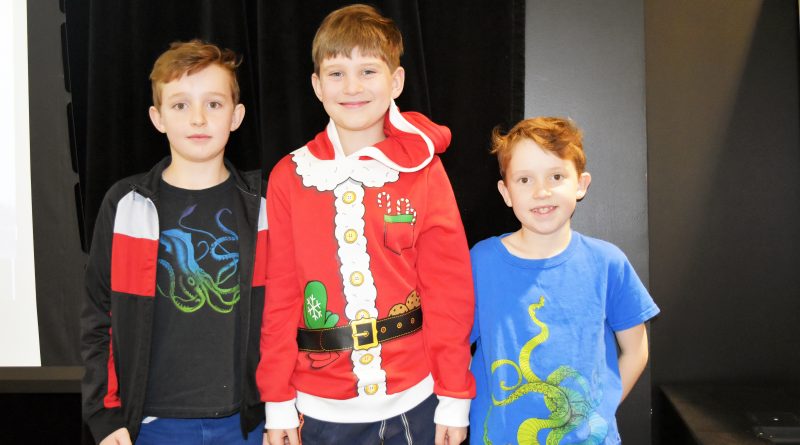 **Photo: From left, Isaac King, Eddie Miles and Alex King are among the CBS residents appearing in a new television commercial
promoting the good life in Conception Bay South.**

If you didn’t already realize how beautiful a place Conception Bay South is to live, a couple of television commercials about to air on provincial and national television have been designed to remind you of it.
The 30-second and 60-second spots, complete with beautiful local scenes, colourful personalities and a feel good message were unveiled last week by Mayor Terry French to a packed room of guests at the Manuels River Interpretation Centre. They will air starting this week on local supper hour news shows and nationally during the Pinty’s Grand Slam of Curling tourney which will be televised from the CBS Arena later this month.

The productions, which are just as slick, colourful and catchy as the provincial tourism ads crafted by Target Marketing for the provincial government, were created by Ray Creative Agencies of St. John’s and cost the Town some $30,000.

“Our town is a big municipality with big ideas,” said French. “It’s a town growing to meet the future head on and there’s lots of exciting things happening here.”

“An event of this scale will certainly have a significant, positive impact on our local economy and on our tourism industry,” French said. “This event will give our town pan-Canadian television exposure and is expected to generate approximately $1.3 million in economic spin-offs… This is an amazing opportunity to capitalize on a large, national audience and show them all we have to offer.”

What CBS has to offer, according to the commercials, is a unique mix of rural and suburban lifestyles bracketed by a breathtaking coastline on one side and forests, fields and farms on the other. The ads show a CBS resident chopping wood, children running through grass on a sunlit path to the ocean, a farmer in Upper Gullies tending his vegetables, children swimming in Manuels River and a woman picking berries near the beach, all things most people living in CBS take for granted, but which take on a new shine when depicted in the blue flickering lights of a television screen. Both spots end with a perspective shot of a couple looking out over the homes and coastline of CBS from the top of Topsail Bluff.

The Town is airing the ads on local supper hour news shows to make sure it captures an audience beyond the curling world, French added.

“We were really thrilled to work on this project,” said Ray Agency’s creative director Terri Roberts. “When we started this project, we asked ourselves one question; that was, what does it mean to create a sense of place? Because almost every town has a walking trail, or a museum or other amazing, modern amenities. But what really makes a place truly unique, what draws us in and begs us to stay or keep coming back? This is what we wanted to get to the heart of with this spot.”

Roberts said the commercial aims to tell the story of an active growing community with the heart of a small town.

“Our aim here was to capture the magic everyday moments, real people having fun and enjoying the spectacular surroundings that make this place so special,” she said. “We tried to capture a sense of play, both in children and adults, whether it’s boating, hiking, swimming, or enjoying spending time in the garden. Play is something we tend to forget about as we grow up and grow older, but it keeps us young at heart, it sparks our imagination and our sense of wonder. So our goal here was to make an emotional connection with our audience, instill pride in the residents and build awareness of the town of CBS as a very desirable place to live and raise a family.”

French thanked the crew of Ray Agency for the finished products. “What a great piece of work,” he said. “This is the first step in creating a brand that we can all be proud of.”

French said CBS is ready and eager to welcome more people to the town and the commercial is part of a marketing approach to bring them here.

“This beauty and unique blend of urban and rural living is what sets us apart,” said French. “It’s the magic of Conception Bay South. It’s the secret our residents know, but now we want to share it with the rest of the world… This is all part of an overall strategy that is being developed to help us become the community of choice.”