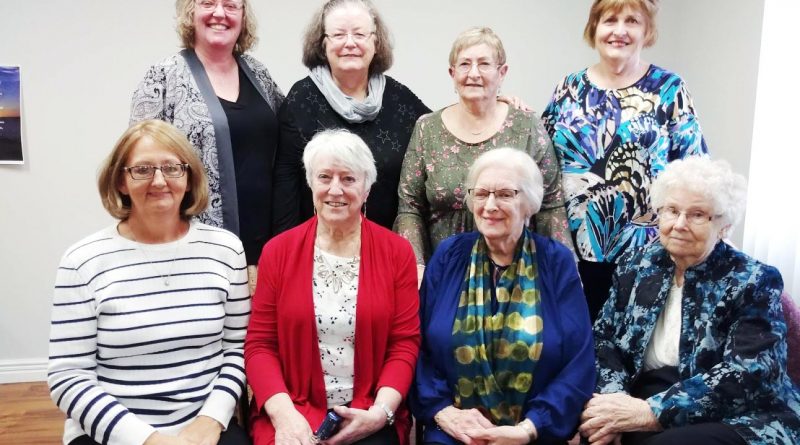 Photo: The St. Mary’s Bay writers contributing to a new anthology of stories include, starting in the back row, from left: Orla Hegarty, Mary Moylan, Jean Kennedy, Sheila Lee; and in the front row, from left: Linda Squires, Marg Breen, Anita Genge and Bride Martin.

There is many a colourful story shared around the card tables and house parties in St. Mary’s Bay: now some of them have been put into print.

‘Write Around the Bay: An Anthology of Stories, Memoirs & Poems by Newfoundland Authors from St. Mary’s Bay’ sells for $20 a copy with most of the proceeds going to charitable causes.

The project was made possible after Riverhead Mayor Sheila Lee was successful in obtaining an Age Friendly Grant from the provincial government.

“I applied for a bit of money to be able to bring together a writer with a group that would be interested in a 10-week session, once a week for two hours, where people would gather around and learn the basic stuff of how you write a good story,” said Lee. “The instructor would introduce a different topic every week, probably it would be on character development and probably one would be on plot and this kind of stuff. By the third week, she was giving us little bits of homework to write something to bring back. Then she’ bring them home and read them and edit them and (indicate) what she thought was good and what should be improved, or whatever, and she’d make suggestions, and then we’d bring them back.”

The instructor was former St. Joseph’s mayor and writer Mary Moylen. She provided some further editing on the stories after the 10-week program was over.

Lee said she didn’t want to go through a regular publishing company to publish the book, because she was told that even if the work was accepted, there would be a two year wait to get it printed. “I wasn’t looking for a masterpiece or anything, so I decided to have it self-published,” she said.

A former student of Lee’s, who is now a teacher herself living in Twillingate, Sherry Singleton, formatted the book for publication. Lee then contracted the printing to a company in the United States using $2,100 that had been left from the production of a play called Spancel that Lee and Moylan had produced a few years ago. Moylan wrote and directed that play, which was taken all the way to Ireland using actors from St. Mary’s Bay and the Southern Shore.

“We had decided that that would not be spent on anything, that it would have to fall into the category of being creative,” Lee explained. “So, when we went to get it published, we used that money to fit the bill.

Enough money was made from the sale of the first 250 copies that Lee has been able to order a second printing.

“We had a launch in St. Joseph’s and that went over really well,” Lee said. “We donated $5 from every book (sale) to the library there.”

The library was actually started some years ago by Moylan. Lee said Moylan deserves most of the credit for the book, given the amount of instruction and editing she provided. Moylan also contributed eight stories to the collection. “It wouldn’t have happened without her,” Lee said.

Some of the authors, like Linda Squires, who contributed six stories and poems to the book, turned out to be natural writers, said Lee. “She’s absolutely brilliant,” Lee said. “She just has that gift of writing. I don’t think her work needed to be edited very much. But mine did – I’m not a writer – mine did for sure. But I feel proud. I feel that we produced a decent quality (book).”

Each writer was given a copy of the book and Lee is hoping to help a few good charities with the proceeds, she said, including The Gathering Place in St. John’s, which will get $5 from every book sold. The volunteers at the Gathering Place will also help sell copies of the book.

“We’re hoping we’re going to be able to generate enough to fund a nice Christmas dinner and we’ll go in there and be part of the group serving it to them,” Lee said. “We’re also hoping to help the Autism Society… the same thing with Ronald McDonald House and Daffodil Place. We don’t want to make money on this book. It’s rewarding enough that we got to this point where we actually were able to take a variety of people from St. Mary’s Bay and work together to produce a book. To me that’s an accomplishment for us. We want to pay it forward.”

Lee said she also hopes to be able to set aside a little of the proceeds to fund another creative project in the New Year. “But there’s nobody individually going to benefit financially from this book,” she said.

Lee’s contribution includes two colourful, funny recollections of life growing up in Peter’s River, one involving her grandfather Dave Hicks, who was the wreck surveyor on the coast for some time, the other a recollection of a showdown that a school-aged Lee had with a local teacher who had banned the children in the community from attending the annual hot supper one year.

“I think it will rekindle memories of years gone by,” Lee said of the collection. “There was nothing dull about my childhood, let me tell you. I’d love to do it all over again. I think it was really and truly the best years of my life. We had nothing, but we had everything.”