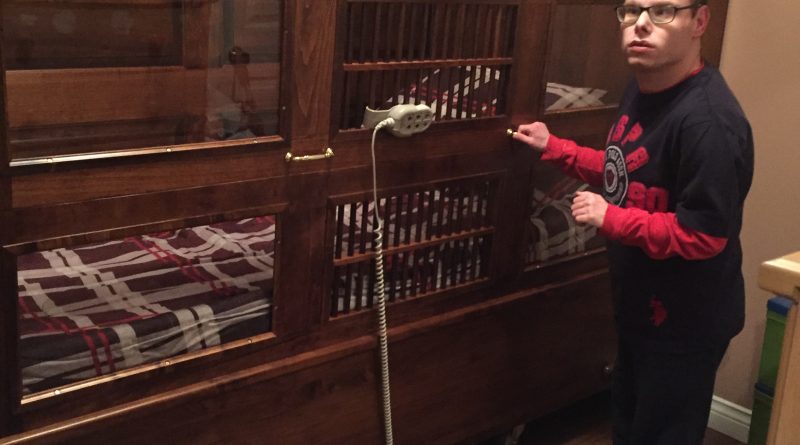 Photo: Mitchell Kielly of Gaskiers – Point La Haye with a new bed that will help keep him safe at night and also help with his severe reflux condition.

Members of a Gaskiers family are sleeping a little easier these days thanks to the generosity of their fellow Newfoundlanders, who donated money to buy a special bed and other equipment for their disabled son.

“We just got the bed,” said Donna Kielly, mother of 20-year-old Mitchell. “We got enough for the bed and a swing for him and an activity chair for him also. It was wonderful.”

Mitchell is legally blind, hard of hearing and can’t speak, but cognizant of what’s going on around him. He was born 14 and a half weeks early and weighed just 1.14 pounds. He was so sick, he spent the first 6 months of his life in the Janeway. After he did come home, Mitchell had to return to the hospital frequently for repeated surgeries, some of which left him with severe reflux problems. Despite all that, Mitchell is active and energetic. He even attended the local school in St. Mary’s, Dunne Academy, until last year. The Kiellys held a fundraiser in August to appeal for help for a special bed to accommodate Mitchell, who gets up on his own a lot at night, standing up in bed with the potential of falling out unless someone gets up to watch him. The new bed takes care of that worry.

Kielly said more than $20,000 was donated. “We got a big donation from someone out in St. John’s who was an anonymous donor,” said Kielly. “He donated over $6,000. I couldn’t believe it… He didn’t want to be known. He said he had money he wanted to contribute because he had healthy kids and he wanted to make sure that Mitchell got his bed.”

The anonymous donor arranged to give the money through the owner of Leaside Manor and St. Shotts native, Dion Findlay and his wife Dora, who held a fundraiser for Mitchell at their inn. Kielly was informed of it by Verna Hayward, a teacher at Dunne Academy, who helped organize the Kiellys’ fundraising effort.

The main fundraiser, held in St. Mary’s in August, was blocked, said Kielly. “We sold tickets, and we had a lot of people e-mailing me money online too,” she said. “Some of them e-mailed big amounts, like $100 at a time, and I was just blown away by all the support. It was amazing.”

Mitchell, meanwhile, is happy with the new bed. “He loves it,” said Kielly. “He loves his bed. He’s so safe in it. The first night I was thinking he might be afraid in it, because it’s like a high crib with windows in the side and rungs. But he loves it. He’s so happy in it. What I like about it too, where’s he tube fed and has severe reflux, we can elevate his head a bit, because it’s an electric bed, so he doesn’t urge and aspirate as much.”

Kielly said the whole family is relieved and getting more rest.

Kielly said she is grateful to everyone who contributed money and prizes and helped with the fundraiser, including her family, Dion and Dora Finlay, local businesses, the Irish Loop Post, The Pearl and The Shoreline newspapers and Paddy Daly of VOCM Open Line for getting the word out, and Dunne Academy, especially Verna Hayward, along with the St. Vincent’s Lions Club and the Holy Name Society in St. Mary’s, which provided the hall for the event.

“It was so overwhelming the support that we got,” said Kielly. “There are too many to mention… I’m afraid to leave someone out.”

A number of donations came from people who read the story about Mitchell in one of the papers. “They were strangers and they saw the story and they just thought that Mitchell was such a sweet little fellow that they wanted to donate,” she said.

“My family was really amazing too,” said Kielly. “A lot of donations came in from family living away.”

The bed itself was over $14,000, Kielly said, leaving enough money for a Rifton Activity Chair, which cost $4,000 and an outdoor swing.

“We didn’t think we would get as much as this,” said Kielly, who was touched by the generosity shown her family.

“Oh my God, yes, it’s unreal, people are so good,” Kielly said. “Even the strangers, I couldn’t believe the strangers just calling me up and saying, ‘We saw your story and we’d like to donate.’ It just blew me away.”