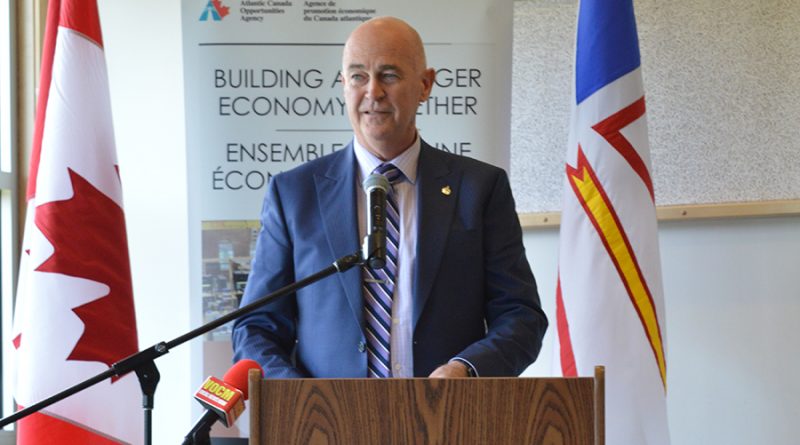 Just in time for the tourism season, the Manuels River Natural Heritage Society will be working on a big marketing push thanks to funding from the provincial and federal governmenta.

Avalon MP Ken McDonald and Mark Browne, the Parliamentary Secretary for Tourism, Culture, Industry and Innovation, announced a federal and provincial funding package for the heritage society to the tune of $112,500 on Thursday. McDonald made the announcement, on behalf of Navdeep Baines, federal Minister of Innovation, Science and Economic Development, of a non-repayable “loan” of $81,250 on the part of the federal government, while the provincial government announced a contribution of $31,250.

It’s the second big funding announcement this year for the Interpretation Centre. In March, the Heritage Society received a donation of $840,000 on behalf of Hibernia for the continuation of educational programming over the next four years. The government investment is intended to develop marketing research and analysis, branding, development of marketing campaigns, creation of a new website and improved outdoor and other signage at the centre. The hope is that a big marketing push will see the Manuels River Heritage Society attract further tourism interest in Manuels River.

“This money will enable (the heritage society) to catch up with marketing the (centre) to where they want it to (be),” said McDonald, when asked why the money was important for the society. “It’s all about generating revenue for the centre so that they can continue to be sustainable and operate on their own instead of having their hand out continuously trying to raise money to keep the bills paid.”

The chairperson of the Manuels River Heritage Society, Don Sword, wouldn’t expand on the specifics of the society’s marketing plan, but spoke to the need of spreading the word about what Manuels River has to offer.

“We’ve been open for five years and most of our growth has been through word of mouth and social media, so we really haven’t had the effective kind of professional marketing to access the things that we need,” said Sword, noting the centre’s website is in need of an overhaul.

Sword explained the province is responsible for developing marketing campaigns to attract people to the island, and the society’s marketing plan will work to attract those who have already decided on Newfoundland and Labrador as their destination of choice. As for the number of people the centre is currently drawing, the centre isn’t in bad shape, according to Sword, but the society is eager to develop the potential of the area further.

“We think we’re doing quite well, but we could do better,” said Sword. “More is always going to be better… We think this is a jewel for Conception Bay South and the Avalon.”