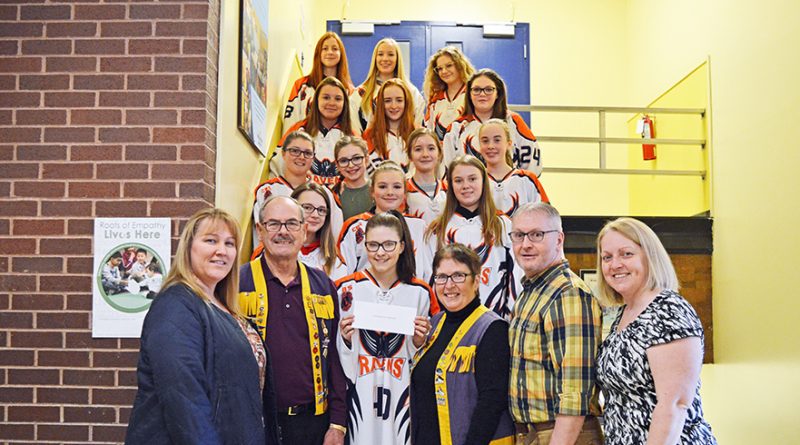 The female Ravens iced their first ever junior high team this year in a small league with two other schools. The league was initiated by Frank Roberts teacher Mike Hipditch, who has two daughters attending junior high in Mount Pearl. Hipditch had been thinking about starting a league for a year or so, but didn’t have the time to pursue it last season.

“I went at it with a little gusto and said that I’m going to really try and get it done this year,” said Hipditch, who also coaches the Ravens.

Two Mount Pearl schools — St. Peter’s Junior High and Mount Pearl Intermediate — jumped on board, icing their own teams as part of a small, fun, league which Hipditch says he is hoping to see grow next year. While Hipditch said he would like to see the program grow into a regulated, competitive hockey league, right now the exhibition style hockey is a fun opportunity for the girls to get some ice-time and develop a passion for the game.

Hipditch noted MacDonald Drive Junior High has already signed up for next season, and he would like to see other schools jump aboard.

“There’s interest out there, but sometimes there might only be five or six girls in a school that play,” said Hipditch. “Then it depends on the school… are they going to ice a team with five good girls and five beginners? Some schools don’t want to do that.”

With a number of the Frank Roberts girls playing on the CBR under-15 team, Hipditch noted he is icing a strong group of girls who also play Bantam AAA as well as boys’ hockey. However, in its infancy stages a small league is an opportunity for the girls to play hockey outside of a minor hockey association at a young age, preparing the students for competitive high school hockey.

“Girls hockey in Newfoundland has been on the upswing the last number of years,” said Hipditch. “The number of girls participating is still low compared to the boys… associations won’t give ice time to a group of say 14 girls. This is completely outside of the association.”

The team has received great support from the Conception Bay South community with the CBS Lions Club donating funds to cover the full cost of the team’s uniforms. With costs relatively low to ice a team, Hipditch encourages any schools interested in icing a team to contact him. While he said that league regulations still need to be ironed out, he is pleased to give the girls the opportunity to have some fun on the ice this season.

“It’s a great laugh,” said Hipditch. “(The girls) are feeling really good about it.”