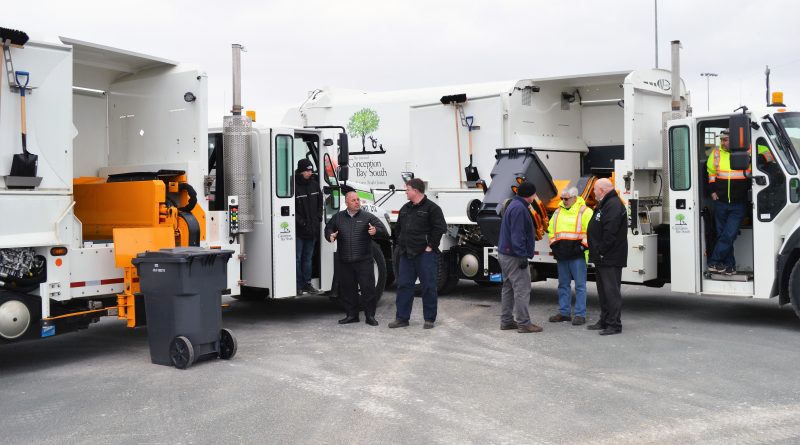 The Town of Conception Bay South has bought two new garbage collection trucks as it prepares to roll out a new automated garbage collection program later this year, a program which Mayor Terry French hopes will significantly reduce the number of workplace injuries suffered by Town workers.

French said that injuries to workers cost the Town more than $100,000 last year, with most injuries caused as a result of workers performing repetitive tasks. The mayor said a spike in the number of injuries suffered by workers last year caused concern for worker safety.

“It’s been hard on our staff,” said French. “This will certainly impact injuries to our workers and it’s an important factor, in fact, the number one factor behind this…When our workers get injured, it costs our taxpayers money.”

French also noted a need to improve the Town’s recycling program and bring the Town’s garbage collection service in line with neighbouring municipalities as other reasons which prompted the decision to implement a new program. The mayor said he anticipates concerns from residents in making the transition to the program.

“We all have a system in getting our garbage out in our own home,” said French, stressing the importance of learning from similar programs in Paradise and Mount Pearl. “We may have to change the way we currently do it, but certainly it will be done with the best interest of the public. I realize there will be challenges but we’re going to do our best to work through that.”

The mayor said plans for the program are still in the early stages with phase one of the three-year plan to roll out the program beginning early in the fall. The two new waste collection trucks, which can load trash with an automated side arm, cost some $800,000. French said while the program is still in the planning stage, he expects residents will be provided with two bins — one for waste and one for recycling, which he anticipates will reduce the amount of waste finding its way to landfills.

“Hopefully with a bin dedicated just to recycling it will reduce the impact on our landfills and on our tipping fees, which would save us (money) significantly,” said French.

Residents can expect further information as phase 1 nears implementation in the fall, French added. He stressed the importance of the program as part of a “progressive vision” for the town.