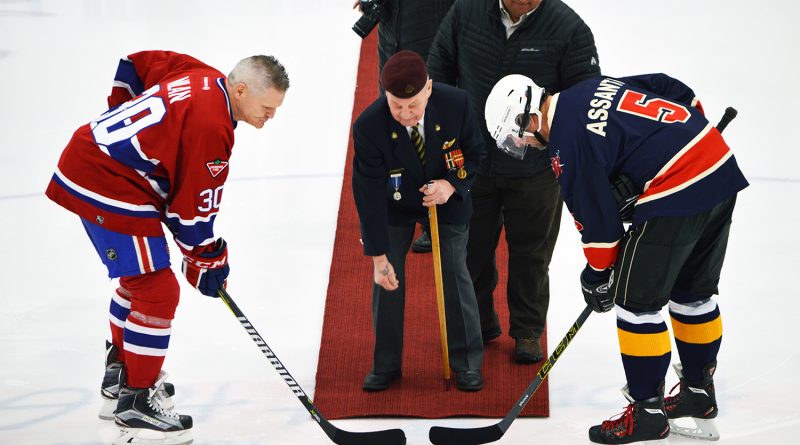 Montreal Canadiens fans in Conception Bay South, and some former local hockey “stars” were treated to an exhibition on Thursday evening as some of the best names in Habs history took to the ice at CBS Arena.

A Canadiens team which boasted over a dozen Stanley Cup rings dazzled fans with a spectacular display of skill versus a team of Conception Bay South residents who were handily outmatched by a team of former professional NHL players. It seemed like the NHL old-timers hadn’t lost a step as they controlled the play throughout much of the game. But, for the Canadiens alumni, and the CBS residents who played against them, it was all in good fun.

“All of the guys have fun when we come out here,” said Canadiens alumni team Coach Steve Shutt. “That’s why the guys come to play, to get out of the house and see some of the guys you used to play with — just get back in the groove a little bit.”

Goalie Richard Sévigny, Marc-Andre Bergeron, Louis LeBlanc, Patrice Brisebois, Oleg Petrov and Chris Nilan were some of the names that skated for the Canadiens alumni team. Long-time Montreal Canadiens fan and member of the CBS team 54-year-old Rod Noseworthy said he was happy for the opportunity to play against some Canadiens players he’s been a long-time fan of.
“(Stephane) Richer actually,” said Noseworthy when asked to name his favourite player on the team. “Unfortunately he didn’t play tonight; Richard Sévigny (too) because he’s a goalie, and I was a goalie growing up.”

The Canadiens alumni put on a good show for the fans, winning the game with a 16-3 final score. Goal scorers from Conception Bay South who snuck pucks past the aged, but still game, Richard Sévigny included, Chad Murphy, Denis Kennedy and Brad Suter. Both teams appeared to be a little winded as the game progressed, understandable given that players from both teams were well removed from their prime.

“If I can make it up that far,” said Noseworthy, after being asked before the game started if he was planning on scoring against Sévigny.

Shutt didn’t lace his skates up Thursday evening. The 65-year old retired winger said that after his last birthday he decided to hang them up once and for all.

However, when the five-time Stanley Cup winner was asked if he’d like to continue travelling with the team to coach, he didn’t hesitate.

“I took a year off and they phoned me asking if I wanted to coach, so I checked my agenda and since I’m retired I’ve got nothing on my agenda — so I said sure,” said Shutt.

The longtime linemate of Guy Lafleur and Jacques Lemaire said he was proud to continue as part of the Canadiens organization, especially with the alumni’s activity to give back to the community that has supported them throughout their playing careers.

“The guys in the NHL, they don’t have time to do a lot of the community work, so that’s where the alumni guys come in,” said Shutt.