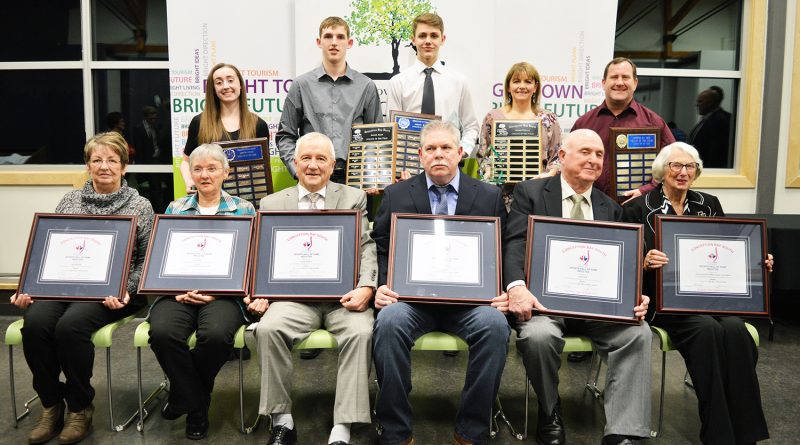 Conception Bay South’s athletic community honoured the best from its past, as well as the top athletes of the current day during the annual CBS Sports Hall of Fame induction ceremony at the Manuels River Interpretation Center last week.

Hall of Fame inductees included Peter Duff, Rita Kennedy, Tony Cronin, Don Bishop, Neville Hackett and the Holy Spirit School Minor Hockey Association. Following in the footsteps of the inductees, athletes young and old were honoured for their ongoing excellence in a wide variety of sports, including Junior Male and Female Athletes of the Year – Cameron Brewer and Hayley Dalton, respectively; Senior Male and Female Athletes of the Year – Jessica Davis and Nathan Lake; and Coach of the Year Robin Brown.

A talented figure skater, Dalton received the Junior Female Athlete of the Year Award after a successful year in both individual and synchronized skating. She won a gold medal at the 2017 Atlantic Championships in Halifax, making her the current Atlantic champion, as well as a pair of gold medals in Skate Canada skills testing — the highest level of testing for young figure skaters in the country. Dalton’s performances landed her the opportunity to train at the Skate Canada National Performance Center in Toronto. She also received a Newfoundland and Labrador travel bursary for competitive excellence.

Brewer was in a league of his own this year. The only nominee for Junior Male Athlete of the Year received recognition for his accomplishments on the baseball field. Brewer was the starting pitcher for Team NL at the Canada Summer Games, as well receiving starting nods for the under-16 and under-18 provincial teams in 2017. The 15-year old travelled to the United States in the fall to play in front of college scouts, where he received top marks.

A talented all-around athlete, Senior Female Athlete of the Year Jessica Davis was recognized for a successful year in two separate sports for the New Brunswick Rothesay Netherwood School. Davis finished third on the prep-school’s hockey team in scoring, landing in the top-20 scorers in the under-19 prep-school circuit. On the volleyball court, she helped her team finish in the top-three in the league. Davis was also a member of the provincial women’s ball hockey team that placed fourth in the national championships.

Senior Male Athlete of the Year Nathan Lake was also quite active on the volleyball court. Lake played for the Canada Summer Games provincial team and was part of a third place team at the Dalhousie Classic where he was named the tournament’s most valuable player. The University of York recruited Lake last fall, where he is receiving a full athletic scholarship to join its successful volleyball program.

The roots of the Conception Bay South minor hockey program can be traced back to Peter Glad Duff, who was inducted into the Hall of Fame for his efforts in creating a minor hockey program for the students of Holy Spirit in the 1960s. Duff was honoured on Thursday evening along with the founding members of the Holy Spirit School Minor Hockey Association, which included over 40 people, all of whom succeeded in planting the seed which grew into today’s minor hockey programs in the CBS-Paradise region.

“The same day I was notified of this award, (was the same day as) the last meaningful hockey game that I coached — Holy Spirit won the AAA high school hockey championship,” said Duff, addressing the crowd at the induction ceremony. “On that same day, my grandsons phoned me from Ontario to tell me that they just won their high school hockey championship in Mayfield. That was about as proud a moment as I had in a long time.”

Duff thanked everyone who nominated him and those in attendance, singling out Frances Barnable, who was also a founding member of the Holy Spirit School Minor Hockey Association.

“There wasn’t a meeting organized that she wasn’t involved in and she put on more band-aids than half of the nurses,” said Duff.

Hall of Fame inductee Rita Kennedy moved to Conception Bay South in 1970, becoming very active in the town’s sports community. Kennedy helped with fundraising efforts to build the Robert French Memorial Stadium and was a pivotal member in the CBS figure skating clubs from 1978 to 2004. Kennedy was instrumental in amalgamating CBC minor hockey with CBS minor hockey to form the CBR minor hockey league, and organized the re-establishment of a CBR female hockey league in 2003.

Don Bishop was inducted into the Hall of Fame for his sports accomplishments on the baseball field, soccer pitch and hockey rink where he was a member of nine championship teams throughout the 70’s and 80’s. The defenceman was known for playing an intense style of game throughout minor, junior and senior hockey. During his career, Bishop received honours as Rookie of the Year, best defenceman and twice as Most Valuable Player during his senior league period. On the baseball field, Bishop played on eight All-Newfoundland teams, as well as for CBS All-Star squads on five occasions.

Tony Cronin received induction honours as one of the first ice hockey officials to referee at the Robert French Memorial Stadium. Throughout the ‘90s, Cronin coached minor hockey as well as serving on the executive of the CBR Minor Hockey Association. He was a key contributor to the effort to acquire funding for the new CBS Arena and currently works to certify new officials in the CBR minor hockey system.

Described as a hard working and aggressive hockey defenceman who originally grew up in Corner Brook, Neville Hackett was inducted for his roles as a player on the Foxtrap hockey team in the Conception Bay South Senior Hockey League during the 1970’s where he helped the squad win two league championships receiving two all-star selections as part of that effort. Hackett represented the town in four provincial championships where he was awarded the Most Valuable and Most Gentlemanly Player Awards on two separate occasions.