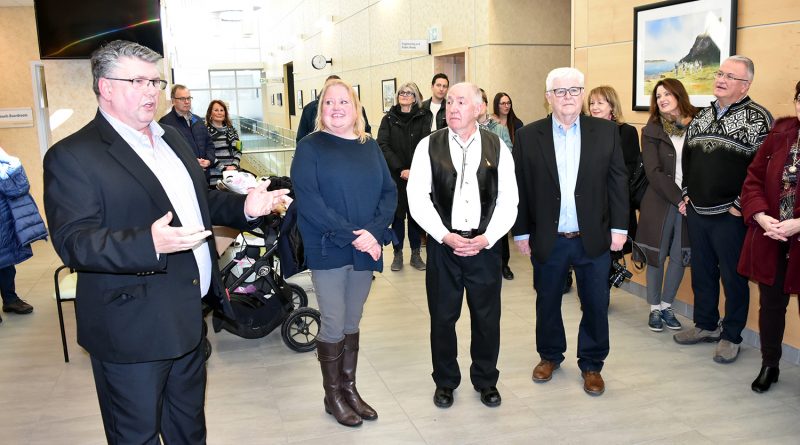 The walls of the Conception Bay South Town Hall are a lot more interesting to look at thanks to the installation of 26 paintings by local artists Jill Moores, George Jarvis and Rick Stentaford.

The trio won a request for proposals issued by the town last year after it received $7,500 in federal funding under the Canada 150th Anniversary of Confederation program to support the arts. The Town matched the funding dollar for dollar to buy works which captured scenes throughout Conception Bay South’s nine communities.

Ward 1 councillor Darrin Bent, who presided over the unveiling of the works on Sunday, said the Town got its money’s worth.

“This is really an appreciation day of a launch of something I think is really great here in Conception Bay South and that’s the true appreciation of the art and the artists who reside here in our community,” Bent said. “We haven’t done enough to acknowledge it in the past and I think this is the start of that and our council is ready to pledge going forward that that acknowledgement will continue.”

Bent said it’s great the project acknowledges all nine communities which constitute the town. “But not only the communities, it acknowledges special places within those communities, places that many of us can relate to as you go along the trailway, or when you’re out walking, places where you grew up and maybe visited as a child, maybe just visiting now as an adult,” he added.

“Preserving that history through art is a fantastic way to make sure that our community is available to those for memories and for growth for the future for our children, and I think the three artists who contributed to this have just done a fantastic job.”

Bent noted the Town was expecting to get nine pieces, one for each community in the town, but was surprised and delighted to receive 26 works of art from the trio.

“That’s just incredible,” Bent said. “That’s through the love of their community and wanting to have it on display for all of us to appreciate and I thank them for that.”

Bent thanked the federal government for supporting the project.

Avalon MP Ken McDonald in turn thanked the Town for participating in the program.

“What better way to spend money than what we see on the walls here today,” said McDonald. “Darrin said we’ve got so much talent to show off, and I think people don’t realize the talent we do have… These are three artists who took part in this program and who applied to the federal government for this funding… but we have so many artists whom we don’t know and don’t see.”

While CBS has so much talent, whether musically, visually or whatever form, McDonald added, there is no one place to showcase it. “And we’re the second largest community in the province,” he pointed out. “You can go to Carbonear and they’ve got the Sheila NaGeira Theatre – we don’t have it here for some reason. I know we spent a lot of time catching up on water and sewer and infrastructure for sports – I think we’ve finally got to start moving so that our local talent can showcase what they do, what they have to offer. I don’t know who should spearhead that, whether it’s the Town, or a group that gets together, but I’m certainly all in on it if somebody wants to take it on. Corner Brook, which is smaller than we are, they have it. We don’t here in CBS. People say, ‘Ah, you’re too close to St. John’s.’ No, we’re not. We have a population of 26,000 people that can support things like that in this town… We can do it here in this town. I think that’s the direction we’ve got to start going. Let’s start providing some of those cultural aspects of out town and encourage our artists and help them and empower them to do what they’re doing, because they’re doing fantastic work.”