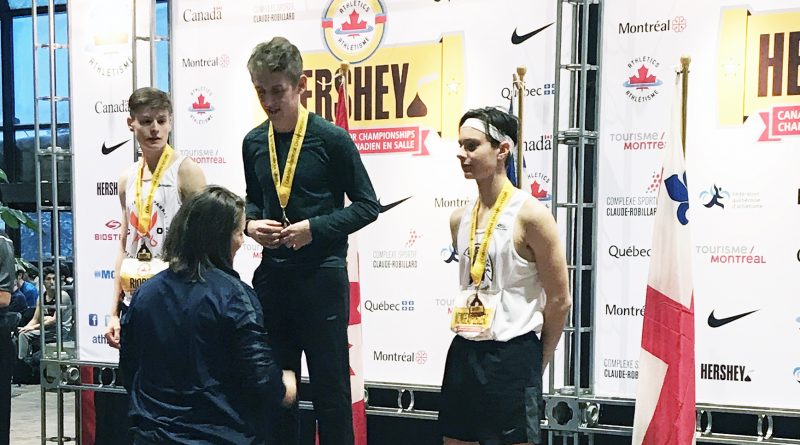 Holy Spirit High student and track athlete Levi Moulton ran away with a gold medal in the 3,000 meter event at the Hershey Indoor Track Nationals held just outside of Montreal, Quebec from Feb. 10 to 11.

“It was unbelievable,” said Moulton about the opportunity to represent the province in the under-18 age division. “The track surface and the facility—everything was at a world class level.”

The 17-year old represented Pearlgate Track and Field at the event. Seven athletes from the club made the trip and brought home three medals from the event.

“Pearlgate has a real stellar line-up,” said Moulton, referencing a number of athletes from the club who have nation leading times in track events. “Newfoundland is doing pretty well in track right now.”

Moulton credited the competitive atmosphere at the club with pushing him to compete at a high level in track and field.

“It’s a pretty competitive environment and it’s great to see these athletes succeed,” said Moulton. “It really pushes you to work harder.”

“I didn’t compete to my ability,” said Moulton. “I ended up pulling a hip muscle just before Cross Country Nationals so I could only train for three weeks before the event. It was pretty disappointing because I feel like if I had been in better shape I could have done so much better.”

Moulton finished fifth in the 1,500 meter race at the Indoor Track Nationals. Not bad for a track athlete who said he considers himself more of an outdoor distance runner.

“I’m more of an outdoor kind of guy, said Moulton. “The indoor has a bit more tighter turns so it hurts a bit more on the knees. I’m really more of a cross country kind of guy.”

Next, Moulton said he’s looking forward to the beginning of the outdoor track season, hoping to bring home more hardware during the summer season.

“We’ve got a little break now to recover a bit, but we’ll start training for the outdoor season which starts in the summer,” said Moulton. “I really like outdoors, but it’s great to do well in the indoor.”