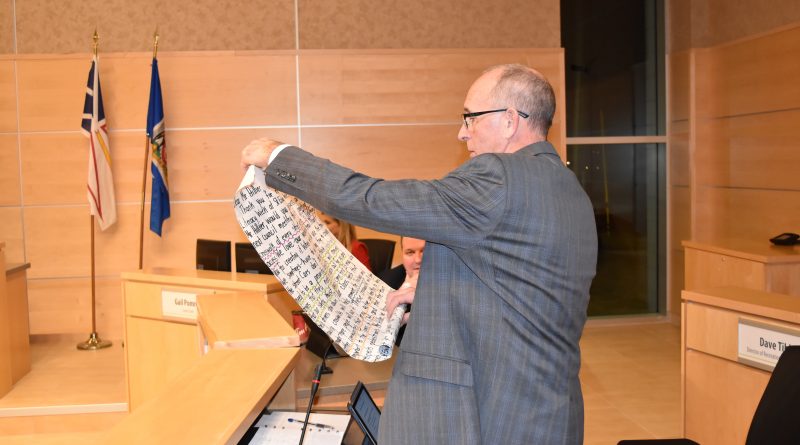 Conception Bay South council has asked its engineering department to review a request by Grade 3 students at St. Edward’s Elementary to place crosswalks on all roads that provide access points to the T’railway.

It comes after the students in Ms. Sherry Tilley’s class used a Literacy Day reading by councillor Rex Hillier to present him with a petition calling for the crosswalks. After a question and answer session with the students, Hillier promised to take their petition and concerns back to his colleagues and discuss the matter in the public council chamber, which he did at the start of last week’s council meeting.

“It was a very nice conversation, they obviously knew exactly what they were doing,” said Hillier, before taking the time to read out the petition in full.

In their petition, the students thanked the Town for creating the trail and said they love to use it. “When we go to use the trail, we sometimes have to wait a long time to cross the street,” the petition read. “Cars don’t stop. We think this needs to be a priority. Crosswalks will remind drivers they need to watch out for us and that our safety must always come first. It may also help drivers slow down!”

The children went on to argue that having more crosswalks would promote the T’railway, perhaps with the result that more people would use it. “These crosswalks will show other communities that being active and healthy is very important to the Town of Conception Bay South and that the Town respects pedestrians,” the petition added. “Mr. Hillier, we know in some places there may be several crosswalks close together, but chances are there won’t be people on them at all times.”

The petition was signed by all the students in the class. Hillier asked that it be forwarded to the Public Works department for review and brought back to council for discussion.

“Obviously these students have thought about the situation a fair bit, their teacher has worked with them to put this together and we need to have a serious look at it,” said the councillor-at-large.
Mayor Terry French was impressed by the students’ effort.

“To see a bunch of Grade 3s involved in presenting a petition to the council is certainly remarkable and I take my hat off to the educator who had to take the lead and to all the students for making themselves familiar with local government,” said the mayor. “It’s too bad things like that are not done in all classes – God only knows what we could accomplish, not only in CBS but provincially and worldwide. I take my hat off to those kids for being so vocal.”